What We Mean With Brandon League And Miguel Olivo

Share All sharing options for: What We Mean With Brandon League And Miguel Olivo

While writing last night, I referred to a few borderline Brandon League pitches that I thought Miguel Olivo framed poorly. I thought all three could've arguably been strikes, and all three were called balls. There's no guarantee that things would've turned out differently had they been called strikes, and it's possible things would've turned out even worse - follow that path and God knows where it leads - but the image of Olivo stabbing at low fastballs stuck with me. And I would've preferred that they be strikes. I like strikes more than balls, when the Mariners are pitching.

Other people were talking about it on Twitter and in the comments. After giving it more time and more thought, I've calmed down. Not that I ever blamed the loss on Miguel Olivo's pitch-framing, but after watching the pitches I'm not sure there's much Olivo could have done. Those pitches just aren't usually called strikes, and League has to be a hell of a guy to catch, with his fastball having such velocity and run. We've seen studies before that identified League as confusing umpires more than most any other pitcher. The things that make him tricky to hit make him tricky to receive.

Anyway, this post is not intended as a strong critique of Miguel Olivo's catching skills. If you want to be mad at Miguel Olivo for his performance last night, be more mad about the double play. The point of this post is just to provide some visuals so you know what we're talking about when we say that Olivo caught some League fastballs funny. I have so little energy right now that I don't know if I'm getting the point across. Let's just go to the pictures. Friday afternoons, you guys. I am so worthless on Friday afternoons.

First, here are some screengrabs of the three pitches I remembered. One was thrown to Travis Hafner, and two were thrown to Shelley Duncan. Remember that the camera angle is off-center, and know that each screengrab was not taken with such precision that I can guarantee the ball is over the plate. 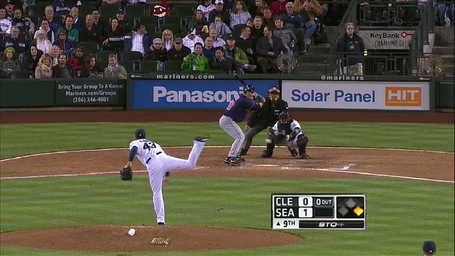 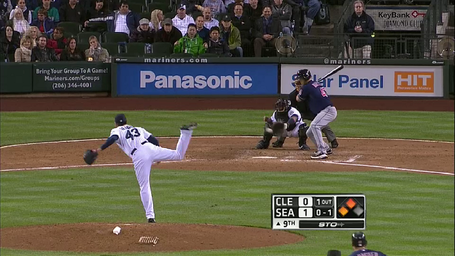 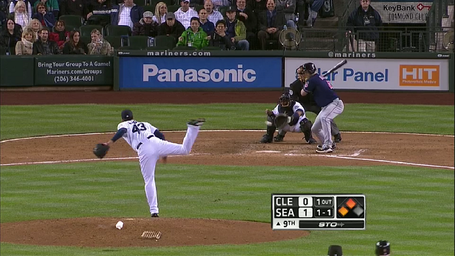 Very similar pitches. They're all low fastballs, right around the knee. Look at these pitches as stills and you can see that, yeah, they were probably all too low. These pitches wouldn't often be called strikes, regardless of the catcher. In live action, the pitches looked better. This is why I've backed off from blaming Olivo. I don't think his technique was good, but I don't think his technique made much of a difference.

Now for his technique:

I don't think you even need to know much about catching to know that that doesn't look right. I don't know much about catching, and I don't think that looks right. In all three. gifs, Miguel Olivo moves his head. In all three .gifs, Miguel Olivo stabs at the ball and drags it downward. In the first one in particular, I wouldn't say Olivo caught the ball so much as I'd say he gobbled it up. Brandon League threw three fastballs around the knees, and Miguel Olivo's glove might've touched the dirt catching each of them.

That stabbing motion is what stood out to me last night. That and the head are going to deter an umpire from calling a borderline pitch a strike. Basically the point here is that, while I don't really blame Olivo's pitch-framing for what happened last night, he demonstrated some questionable pitch-framing skills. It's not easy to catch Brandon League, but I feel like Olivo would wish he didn't look like what he looked like. I think a catcher would recognize a catcher who isn't framing very well.

So that's what we were talking about. Please don't interpret this as more piling on Miguel Olivo. There are plenty of valid reasons to pile on Miguel Olivo without delving into his framing last night in the ninth. This is just to elucidate something we were talking about, in case you didn't notice it yourself and had questions. I want to take a nap so bad. I hope some of this, any of this made sense.