This is about Felix Hernandez pitching, though. This afternoon, the Seattle Mariners play the Colorado Rockies, and Felix Hernandez starts opposite Jamie Moyer. Obviously, there's a lot to be said about that showdown, but I can't bring myself to think too much about the Moyer side, because it's the Felix side that's piqued my curiosity.

I noticed in March, when I could, that Felix's velocity was down. I mentioned this in the season opener game recap. Nobody was saying anything and Felix seemed perfectly happy, so I wrote it off to Felix coasting. I figured his velocity would spike up in the opener, once the games started making a difference.

It didn't, at least according to the Tokyo Dome radar gun. The same gun that clocked Brandon McCarthy about normal and Tom Wilhelmsen about normal the same day had Felix topping out around 89-90. He still got his results, sure, but this has advanced from kind of weird to notable. Felix Hernandez is officially missing some miles.

Ever vigilant, Shannon Drayer's on the ball:

The velocity is the only thing that Felix appears to be missing. He has built up to over 100 pitches and his movement and command are there and have been all spring. I asked Willis just how aware Felix was of the drop in velocity and he said he didn't know. One thing is for sure, Willis does not want Hernandez focusing on it.

Here's a sense of what we're dealing with: 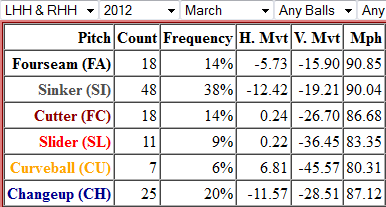 The identifications aren't all perfect, and the sample sizes are limited, but you get the idea. The same system that had Felix reaching the mid-90s in March 2011 put him in the low-90s in March 2012.

Don't freak out just yet. I know that you already started freaking out minutes ago, but if you've gotten here, relax. All other indications are that everything's fine. Felix's results have been good. His command and movement have been good. He hasn't said anything to indicate that he's feeling discomfort, and has in fact denied that he's feeling discomfort. According to Carl Willis, Felix "says he feels fine."

Of course, Michael Pineda said that he was fine over and over, too, until eventually he said that he was not fine. Pineda was diagnosed with inflammation in his shoulder. But these situations aren't alike, because Pineda's low velocity was accompanied by struggles. Felix, not so much, except for that one game.

So we don't know what to make of this yet. I'm not at the worried stage, but I'm at the heightened-awareness stage. And it'd be reassuring to see Felix kick it up in Peoria this afternoon. Something to show progress. He doesn't need to make it all up at once, but he can take a step.

Felix could be not fine. Felix could be fine, and building himself up. And there does exist the possibility that Felix is fine, and will simply throw slower. In that event, remember that he's got five pitches. Velocity doesn't matter to Felix the way it matters to Pineda, because Felix has a broader assortment of weapons.

We'll see where we go with Felix from here. I urge you not to panic, because nobody is panicked. They're just...monitoring the situation, and that's the right approach for now.