The At-Bat That Killed

Share All sharing options for: The At-Bat That Killed

In this post, we're going to reflect on an at-bat from the game last night, because who wouldn't want to keep thinking about the game last night? At one point the Mariners had like a 98 percent chance of winning, so they probably won, and isn't it fun to dwell on Mariner wins? What, no, that seems unlikely, I don't know why you'd lie like that.

I'm singling out one at-bat, and it's from the bottom of the ninth inning. It's not the only bad at-bat from the bottom of the ninth - I didn't like what Justin Smoak and Jesus Montero did, although Montero might've had a hittable pitch - but it's the one that's sticking with me, and the one where the Mariners blew a glorious opportunity. John Jaso made the final out with the bases loaded, but Jaso got a 2-and-0 high fastball and hit it pretty well. I don't have as much of a problem with Jaso's at-bat as I have with this one.

I'm talking about Michael Saunders' at-bat, which you probably deduced. Granted: Saunders shouldn't have had an at-bat in the first place, since Montero should've bounced into a 6-4-3 double play. Granted, sometimes even great hitters miss hittable pitches. I don't want to make this at-bat seem more significant than it was. But this at-bat has been gnawing at me, so, here, let it gnaw at you, too.

Saunders was batting with one out and runners on the corners in a 9-8 game. Montero had just cleverly hit a groundball off Jason Donald's face. Saunders took a pretty well-placed first-pitch slider for a strike, and then he took two balls to swing the count in his favor. At this point, Saunders is looking for anything to drive to the outfield. 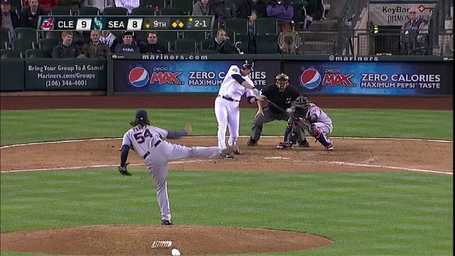 A 2-and-1 fastball, out over the plate. The old Saunders might've missed this pitch or popped it up, and neither of those things happened. But the new Saunders, if he is a new Saunders, fouled it off. He immediately expressed displeasure in himself. From Saunders' perspective, this was a promising pitch, and he didn't take advantage. 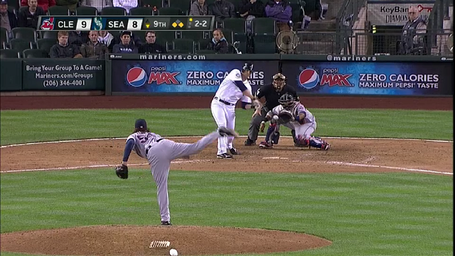 A 2-and-2 slider that Perez didn't put where he wanted because, surprise, Chris Perez has terrible command of his pitches. If there's one pitch I'm most confident in Michael Saunders punishing, it's an elevated breaking ball on the inner half. Saunders fouled it off. This pitch couldn't have just tied the game - this pitch could've won the game (for the Mariners). 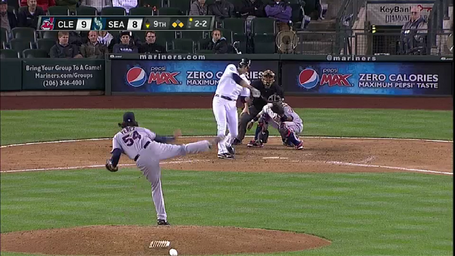 A 2-and-2 fastball, belt-high, over the plate. Again, not where Perez was trying to put it, unless Perez is a moron. What's easier to drive to the outfield than a belt-high fastball over the plate? Saunders fouled it off. Saunders hadn't yet swung and missed, which was nice, but when you're getting hittable pitches, missing by a little isn't too different from missing by a lot. Of course, with two strikes, better to miss by a little. Still, this was the third consecutive pitch that Saunders could've driven and didn't. 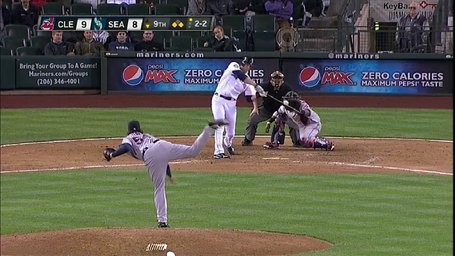 And it's over. This is a slider, again belt-high, a little farther outside than the previous pitch. You can tell from the screenshot that Saunders swung under it, and he popped it up to shallow left. A few more millimeters and Saunders might've driven it deep enough to left to score Munenori Kawasaki, but he didn't, as Aaron Cunningham made the catch just behind a ranging Jason Donald. Four opportunities for Saunders to be a hero, and four failures. The Mariners' odds of winning dropped from about 46 percent to about 19 percent. They weren't dead, but they were less alive.

Saunders has done some good work. He's looked better at the plate than he has in the past, and he hit a number of balls hard on Tuesday, including a fly to straightaway center that might've left the park on a warmer evening. But at-bats like this are memorable at-bats, and one has to be conscious of Saunders growing frustrated. He's hit some hittable pitches,but he's also missed some hittable pitches, and missed hittable pitches on Tuesday in large part led to a Mariners loss. Saunders may or may not be aware that he's running out of time, but we're aware, and at-bats like this don't help anything.

Now I have made too much of one single at-bat. I feel like such a regular sports fan now. More baseball tonight, which I'm sure will deliver more frustrating at-bats. It's the Mariners way!