Share All sharing options for: On Ichiro, Number Three Hitter

So, it's early, which I'm pretty sure is how every baseball article written this time of year begins, or should begin. It's too early to take things too seriously, as the Mariners, for example, have played two opponents. They've been exposed only to the Texas Rangers and the Oakland Athletics. And the nation of Japan, but Japan isn't an opponent of ours, anymore.

With that said, a few days ago I wrote an article you probably didn't read about trying to use early-season statistics to identify possible true-talent changes. It's nearly impossible to separate the signal from the noise, but in the early going it stands to reason that there is both signal and noise. Filler filler filler now I'm going to talk a little bit about Ichiro because Ichiro, as always, is an interesting character.

Mostly, right now, I'm interested in whether or not Ichiro has changed. Ichiro's a number-three hitter now, which you already knew provided you aren't literally dead. Early in the offseason, when it looked like Ichiro could be bounced from the leadoff spot, we discussed whether or not he would change. Later in the offseason, after it was confirmed that Ichiro would be bounced from the leadoff spot, Ichiro said that he wouldn't change. He said he'd make adjustments, but Ichiro's always making adjustments. He implied that his game wouldn't change, based simply on a new lineup position. 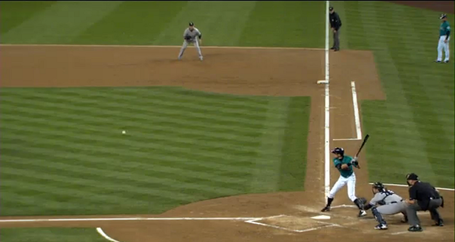 The pitch is on the way, and Ichiro has already lifted and planted his front foot. His front foot is now more or less on top of the front of the batter's box. Now here's Ichiro from the other day: 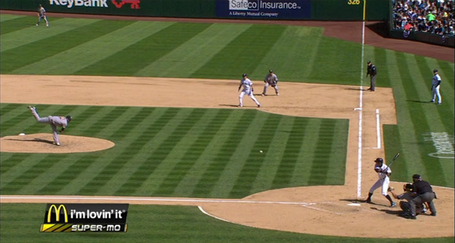 The pitch is on the way and Ichiro has already lifted and planted his front foot. His front foot is not on top of the front of the batter's box - it's behind it. Ichiro has moved back in the box. This is something people have been talking about for some time. It came up during yesterday's broadcast. The effect is that Ichiro now has a split-second more time to see each pitch. That extra split-second could give Ichiro more opportunities to pull the ball to right, instead of slapping it to left. I don't want to get ahead of myself, though. What we can say with a high degree of certainty is that Ichiro has moved back in the box. The rest beyond that is speculation, even if educated speculation.

So that's an adjustment. Now we look at the numbers. I have to caution you to be very, very careful with the numbers at this point in time. Remember: early! Remember: two opponents! Eleven total games! But, Ichiro has a contact rate of 98.5 percent right now. Another way of putting that is that Ichiro has swung and missed one time. Ichiro's always been an excellent contact hitter, obviously, but last season he was at 90.4 percent. His high since 2002 is 91.7 percent. He's been hitting the ball more than past Ichiro. He's also been swinging less - his swing rate right now is actually below the league average. This is because he's swung at far fewer balls. Good sign, yet too early to fully believe.

Honestly though, what mostly caught my attention was something else. According to FanGraphs, Ichiro has put 44 balls in play. Of those balls in play, 18 have been listed as grounders. That gives Ichiro a groundball rate of 41 percent, against last year's 60 percent, and against a career mark of about 56 percent. We'd expect Ichiro to have put roughly 25 balls on the ground. He hasn't. I've gotten the sense that Ichiro's driven the ball a little more, and the numbers bear that out. His line-drive rate is up, but I don't like talking about line-drive rate very much.

What we see in the numbers is that Ichiro's contact rate is up, his strike-zone discipline is up, and his groundball rate is down. Those are all potentially interesting. However, before we make too much of this, the Mariners have baseball's sixth-best contact rate, third-best rate of swings at balls, and fourth-lowest groundball rate. We don't know how much of this is Ichiro, and how much is a function of who Ichiro has been facing.

So we have some stuff to monitor going forward. If Ichiro is going to hit fewer grounders, would that be good, given how often he turns grounders into hits? No idea. Would depend on how much additional power he'd show. Any increase in contact rate would probably be good, and improved plate discipline would definitely be good, but I'll give those things more time to stabilize.