Share All sharing options for: Mariners Score Unnecessarily Often In Win Over A's

I'm not one of those people who suggests that baseball teams should save their runs for when they matter, because if we're taking it genuinely, things obviously don't work that way, and if we're taking it as a joke, it's not a funny joke. Do people understand why it's not a funny joke? It maybe - maybe - might've been funny the first time. It has never been funny since. I don't want to sit here and lecture people on comedy because everybody has a different taste in comedy, but this is a bad joke that shouldn't be made.

With all that said, the people who do suggest that baseball teams should save their runs for when they matter are probably wondering what the Mariners just did Saturday night, because they beat the Oakland A's 4-0, instead of 1-0. If you believe that runs can be conserved and deployed at will, and if you believe that the Mariners won't score many runs, as you should obviously believe, then this was nothing short of overkill.

I've now wasted two paragraphs on nothing. And I'm going to be forward with you: no long, usual recap tonight. There will be occasions like this when I have other things I need to do, and tonight I have other things I need to do. So I can't spend the amount of time on this that I'd like. At first I felt guilty about this, but then I thought, why? And then I went back to feeling guilty. I'm sorry to let you down!

Because I'm pressed for time, I'm only going to focus on what was important. There were very few important things. One was the performance turned in by Hector Noesi. Facing the Oakland A's at Safeco Field is a completely different experience for a pitcher than facing the Texas Rangers in Texas, but Noesi didn't fluke his way to eight shutout innings. Pretty much all the concerns about him we had after his first outing were...well not negated, but we're less concerned now after having watched this.

Noesi threw 105 pitches, which is impressive enough for a recently-converted starter. Of those, 65 percent were strikes, which is a good rate, and the A's managed but a single line drive. What was the big key to Noesi's success? You can point to the one walk and six strikeouts, and the strikeouts certainly helped, but Noesi somewhat improbably induced nine infield pop-ups. Nine infield pop-ups! Dustin Ackley caught four of them, Alex Liddi caught three of them, and Brendan Ryan caught two of them. At least one of the infield pop-ups was caught by Ryan in the shallow outfield, so that's an in-between, but not really.

Noesi just wasn't pitching out of trouble very often, because the A's couldn't square him up. He got Yoenis Cespedes to bounce into a big double play in the fourth. In the eighth, looking to preserve his shutout, Noesi was left in to face Coco Crisp with two out and two in scoring position, and Crisp popped up on a first-pitch fastball. Crisp immediately slammed the bat down outside the box, as the A's were visibly frustrated.

It's hard to say how much of this was Noesi and how much was the result of Oakland's swings, but if Noesi lost Eric Wedge's trust last week, he just earned it back. This was a quality start from a guy who could be a quality starter.

After Noesi got Crisp to pop out to end the eighth, he offered a high-five to Jesus Montero. Montero shook his head, and Noesi resorted to patting Montero on the back. I don't know what that was about and I don't want to know what that was about because in my head Noesi threw a great game but drank Montero's Squirt before the game, and that made Montero upset, because Squirt is delicious.

Jesus Montero was also important. I narrowly missed his home run because I was watching a playoff hockey game, but I'll always choose playoff hockey over regular-season Mariners, and Mariners highlights have replays. Jesus Montero hit a home run. It was his first home run as a Mariner. It came in the bottom of the second, in a full count against Tom Milone. What was impressive wasn't that Montero homered, because we expect Montero to homer. What was impressive was the way that Montero homered. He drove a fastball deep and out on a line to straightaway center field. People have in the past referred to hitters with the strength to conquer Safeco Field. Montero demonstrated that he might have the strength to conquer Safeco Field. You just don't see home runs hit like that very often. Drives to straightaway center die in straightaway center. They don't just speed out like Dee Gordon saw them and doesn't approve.

Awkwardly, as Montero was rounding the bases, the left-center scoreboard lit up: 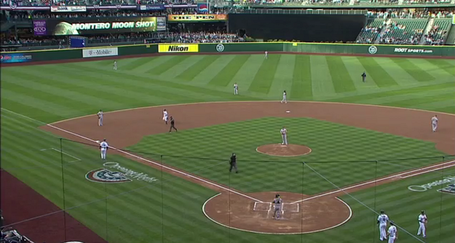 Safeco Field loves home run wordplay. The problem with "Montero moon shot" is that Jesus Montero didn't hit a moon shot, unless the moon is alarmingly close to the Earth's surface and the perceived distance is an optical illusion. Jesus Montero will hit some moon shots before the season is done, but not every Jesus Montero home run is a moon shot, so this might need to be reviewed. Maybe they can have two categories: Montero moon shot, and Montero missile. I literally just thought that up as I was beginning that sentence. This isn't hard. And still I don't think they ever came up with anything for Carlos Peguero.

That's about all I have time for tonight. Justin Smoak drew a bases-loaded walk. Neato. Miguel Olivo didn't do anything. Miguel Olivo has reached base five times this season. Something to think about as you enjoy the Mariners' win yet try to stay grounded. Blake Beavan and some dude finish the series tomorrow just after 1. Well they'll start finishing the series tomorrow just after 1. I don't know when the series will actually end.