Mariners Pick Angels Up, Punt Them Off Bridge

Share All sharing options for: Mariners Pick Angels Up, Punt Them Off Bridge

Man I hope nobody reads this shit and actually takes me seriously. This afternoon, the Mariners scored six runs and the Angels scored four runs. Here are the names of the pitchers who allowed runs:

Here are the names of the guys who drove in runs:

That's spring training baseball right there. If ever spring training results were to be meaningful, which they aren't, they'd be meaningful later on, and not this early, before cuts and before guys get stretched out. The difference in this particular game wound up being a two-run dinger by Catricala off Arenas. I've never even heard of Orangel Arenas. Baseball-Reference tells me that last season he struck out 4.1 batters per nine innings in double-A. It doesn't tell us anything that Vinnie Catricala can go deep off of Orangel Arenas. Vinnie Catricala already treated double-A pitching like plexiglass treats hummingbirds. I don't know if this is a common thing but at my old house we had plexiglass by the pool that killed a lot of hummingbirds.

I'm already here so I guess I might as well talk a little more about the game. Blake Beavan started and lasted four innings on a small pitch count, which is longer than Anthony Vasquez lasted three out of seven times on no pitch count. Beavan retired ten guys in a row at one point and generated three strikeouts, which is a hefty total for Blake Beavan. Beavan made 15 starts with the Mariners in 2011 and exceeded three strikeouts five times. Those five times, he had four strikeouts. Blake Beavan never generated more than four strikeouts. With Arizona in 2001, Randy Johnson never generated fewer than four strikeouts. The guys Beavan struck out were Bobby Abreu, Jorge Cantu, and Chris Iannetta, who are not horrible.

This was a scoreless game going into the seventh. In the fourth and fifth, the Mariners had to deal with Matt Shoemaker, an Angels pitcher who reminds me of Chris Bootcheck, who was an Angels pitcher. Finally in the seventh, the Mariners got to Loek Van Mil, who is listed at seven-foot-one and whose full name is Ludovicus Jacobus Maria Van Mil. Here is a picture of Loek Van Mil getting pulled: 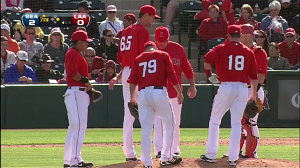 The Mariners' first run scored when Trayvon Robinson bunted Luis Rodriguez home from second. Robinson bunted to the mound and Van Mil threw the ball away, which is absurd when you realize he probably could have just tagged first base from where he was standing. (Tall jokes.) The Mariners' second run scored when some guy singled Robinson home. Then Darren Ford drove that guy home, and then Johermyn Chavez drove John Jaso home, and you realize that this assortment of whoevers produced more runs in one inning than the Mariners managed in 95 whole games last season.

Catricala homered to center in the eighth. Center is a long way away. Jesus Montero drilled a ball off the wall in right, and though he was held to a single, one gets the sense that Montero's opposite-field power hasn't inexplicably vanished. Kyle Seager struck out two times, but at least Mike Carp struck out two times, too, and wait, no, hold on, both of those guys are Mariners, that's bad. Chris Iannetta struck out two times for the Angels and that was in a game started by Blake Beavan. So Iannetta should probably retire. There was talk on Twitter that the Mariners' dugout had a problem with a Luis Rodriguez called strikeout, which, I don't know what to make of that. They're taking things seriously, awesome, good for them. There's also no benefit to complaining and maybe spring is when teams get reputations. If the Mariners get screwed by Kerwin Danley during the year, we're gonna know why.

Michael Saunders had two more hits. Maybe he's advancing out of that "I pretty much only ever embarrass myself" stage that most of us advance out of when we're 17, or three. Miguel Olivo drew an unintentional walk. I don't know about that Loek Van Mil cat you guys.

Five Cactus League wins in a row over the Angels. The Mariners have established their dominance. Tomorrow, it's the Cubs, who I don't know why they're even a baseball team.