The Ugly Side Of Rooting

Share All sharing options for: The Ugly Side Of Rooting

That's a dumb headline, because there are a lot of ugly sides to rooting. Rooting for sports teams can make people do ugly things. I wonder how many of my posts begin with me talking about my own headline. Feels like a lot of them lately. I should write better headlines. Or I should keep doing things this way because I end up with easy introductions. All right.

That's gotten people increasingly concerned. There was more and more talk that Pineda might start the season in the minors. That was before his outing Friday night. Friday, Pineda started against the Phillies, and if his job was in jeopardy before, now his job is in...double...jeopardy. 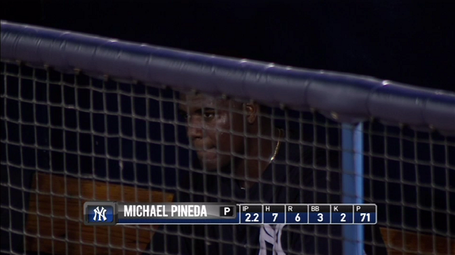 The numbers were bad. The fastball was the same, which means it wasn't the same as we saw last season. Pineda said afterwards that he had some shoulder discomfort. He also just basically bummed some people out.

A year ago, Michael Pineda was a wide-eyed, adorable rookie for the Seattle Mariners. He was easy to love for his talent, but he was also easy to love for his warm and bubbly personality. He was eminently quotable, he was enthusiastic about everything, and he lived with the team's bullpen coach. He said one of his best days was getting to go up against the Yankees. One of his other best days was the day he got his driver's license. Michael Pineda was a player you could fall for, and he always had a smile on his face when he wasn't scaring the shit out of dudes.

Then Pineda got traded. For a hell of a talent in Jesus Montero, and for a purgatory of a talent in Hector Noesi. It did and did not come as a shock; no one was surprised that Pineda was available, but the timing caught everyone off guard. There wasn't any lead-up. There weren't any rumors. There were tweets that said Michael Pineda was on the verge of being traded to the Yankees, and then there were tweets saying Michael Pineda had been traded to the Yankees.

Now Pineda is a Yankee, and he's having a hard time. It was his own fault for making a bad first impression, but he's facing media unlike anything he's ever seen. His performance isn't there, and his mechanics aren't there. Michael Pineda has to feel like he's fighting the entire world.

And there's at least a small part in almost every one of us that's happy. Every Mariners fan wants Montero to blossom into something special, and Noesi to blossom into something that his parents would say is equally special. But there's also that part that wants the Mariners to have won the trade. That wants the Yankees to regret their bold exchange. That requires that Montero and Noesi are good, and that Pineda is less good than people thought.

Michael Pineda is still Michael Pineda. His personality's the same, and all that's changed is that he went from wearing a Mariners uniform to wearing the uniform he's always wanted to wear his whole life. Pineda was overjoyed to become a Yankee. Which makes sense, because what international player wouldn't want to play for baseball's premier franchise?* It was easy to be taken aback by Pineda's post-trade quotes, but he was just saying what he was feeling.

Michael Pineda is still Michael Pineda, but because of a trade, most Mariners fans will delight in his misfortune, in part or in whole. He was lovable a year ago. He was lovable a few months ago. He changed his uniform without requesting it. And now a lot of people are monitoring his situation, making sure he hasn't re-discovered his velocity or blossomed into an ace.

It's weird what sports does. Michael Pineda went from beloved to not beloved by changing his shirt. All that really matters is that Montero develops, and that Noesi develops, but people don't want to regret the loss of Pineda, so they don't want Pineda to make them regret it. As if it makes any difference. I know it's true, because part of me feels the same way. I'm most interested in the progress of the Mariners' two guys, but I'll confess that I've felt shreds of gladness when reading about Pineda's struggles. When I think about it, I don't like it, but it's there.

Ultimately I guess it doesn't matter. We're not interacting with Michael Pineda, so the way that we feel has nothing to do with the way that he feels. We're in completely separate spheres. If and when he returns to Safeco Field, I really do hope he gets a standing ovation, because Michael Pineda should know he was loved. Maybe it was my mistake to try to break sports and sports emotion down to something rational. There isn't anything rational about any of this so there doesn't have to be anything rational about our behavior. Still...still. Sports can stick you with some unpleasant traits. Dig deep enough and all of us are children.