Background 1
Dustin Ackley's gotten a little stronger, at least according to Dustin Ackley. Greg Johns wrote about it in February, a month I've completely forgotten about. Quote:

"I feel a lot better," Ackley said. "I gained a few pounds this offseason and feel a lot stronger. I didn't have a Fall League or anything this year, so I had that time to work out and rest and get some more swings in. It was good. I think a year under my belt helps and I had a [workout] program I really liked."

Point
Wednesday morning, sometime around 4am PDT, Dustin Ackley came to the plate against Brandon McCarthy in the fourth inning of a scoreless game (in Tokyo, Japan!). The count worked to 1-and-1, and Ackley stood beside the plate with an unassuming stance: 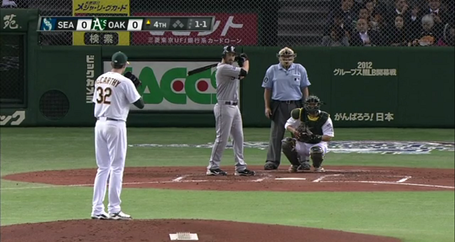 McCarthy got a pitch spot from Kurt Suzuki: 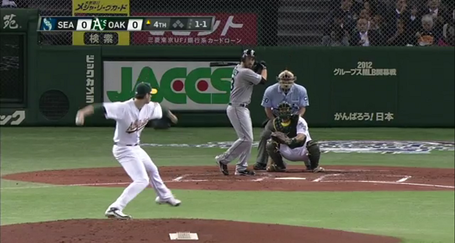 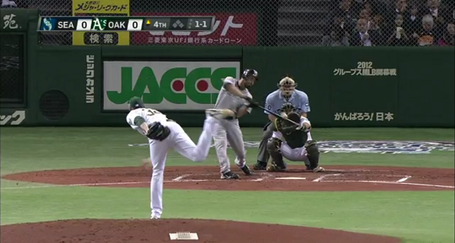 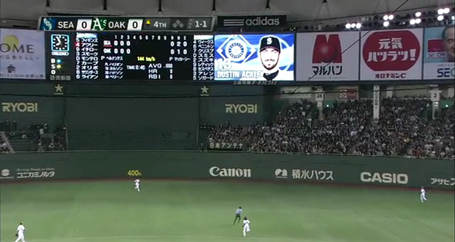 And this is where the ball went: 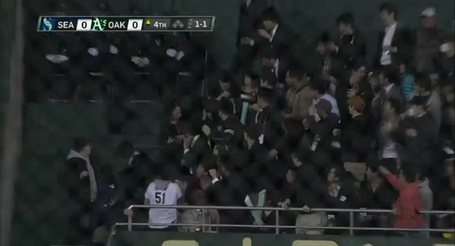 A home run to pretty much dead-center, several rows back. We'd seen Dustin Ackley go deep before, but it felt like we hadn't seen Dustin Ackley go deep like this. And indeed, we hadn't. According to Hit Tracker, Ackley's longest home run last year was 413 feet, and his hardest was 105.4mph off the bat. This one measured at 437 feet, and 106.3mph off the bat.

Nothing weird going on, either. The Tokyo Dome is a dome. No temperature boost, and no wind boost. No elevation boost. Dustin Ackley was in a standard baseball environment, and he killed that pitch.

Ackley only went deep six times in the Majors last season so it's not like there's much to compare to, but I'm a guy who loves to make too much of home-run distance information, and what this suggests is that Ackley might really have more pop. That ball he hit on Wednesday is a ball that gets out of any yard that isn't stupid, and by a considerable distance. I choose to let that make me happy.

I think Dustin Ackley drew two primary criticisms as a prospect: his defense at second wasn't supposed to be very good, and he wasn't supposed to hit for much power. His defense at second looks fine, if not better than fine. And the power is there, to a greater extent than you'd expect from someone with Ackley's body and stance. Dave called him "sneaky strong", and that's a good label. Dustin Ackley doesn't look like he should hit for much power. Dustin Ackley can hit for power.