Share All sharing options for: The Battle For Cactus League Supremacy Begins Today

It's Friday, and you know what that means: tomorrow is Saturday! Today you can slack off, and tomorrow is the weekend! That's great news, unless you're a bartender or a waitress or any number of other things. But Friday - this particular Friday - also means something else. On this particular Friday, the Seattle Mariners stop playing with themselves and start playing with others, as the Cactus League schedule gets underway.

At 12:05pm Pacific, the Mariners will take on the A's. Just as the Mariners and A's will officially open the regular season, so do they officially open the exhibition season. There have been intrasquads, and there have been games against college teams, but this is the first game pitting one professional baseball team against another.* Major League Baseball really knows how to put on a show. If the regular season is the headliner, the opening act is basically a guy trying to juggle 16oz Mason jars of acid for the first time.

* A's players do get paid

Here's the thing that might get you really excited: today's game will be broadcast on the radio. At 12:05pm, Rick Rizzs and Dave Sims will announce a baseball game that has never been played before. It will be a brand-new, live baseball broadcast. Obviously, it's just exhibition baseball, but this is the part of spring training before the novelty wears off. This is the part of spring training where you think "baseball!" instead of "more spring training baseball." You might listen in, and listening might make you feel all fuzzy-like.

If you can't listen in, or if you don't want to listen in, you can follow along with the action on MLB Gameday. That's right, Gameday's back too, and Gameday is like radio for people who don't care for people. "Did Luis Rodriguez hit a groundball, or did he hit a sharp groundball?" you might ask yourself. Gameday will have your answer! From here on out there will also be PITCHfx data for games in certain stadiums, which I'm sure we'll analyze and over-analyze.

Here are the lineups for today's game, courtesy of the Mariners' unofficial official blog: 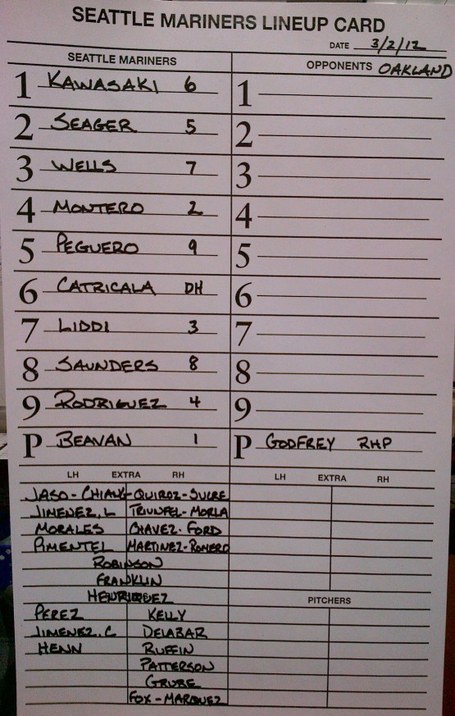 I've already used this joke but boy did the A's ever tear their team apart. Godfrey's going to run a BABIP of like a zillion unless he strikes everybody out. He'd better strike everybody out on three or four pitches since he doesn't have any support in the bullpen. I dunno, this one seems pretty winnable.

I don't know what there is to remark on - even though this is the Cactus League opener, it's a road game, and teams usually don't send their full squads on road games. That's how you end up with Munenori Kawasaki leading off and Carlos Peguero hitting fifth. Note that Michael Saunders is hitting above somebody. This is a big day for Michael Saunders. In all honesty, it would be so, so, sooooo great to see Michael Saunders actually turn into something, but he's earned our collective skepticism. The burden of proof is now on Saunders' side as he looks to convince the world that he isn't a complete disaster.

Maybe it's worth pointing out that Jesus Montero is catching instead of DHing, but he's catching Blake Beavan, and all Blake Beavan ever does is throw straight hittable fastballs somewhere in the neighborhood of the strike zone. When Blake Beavan is pitching the Mariners might not even need a catcher in the first place. They could put that guy in the shallow outfield and drive Beavan's BABIP way down.

A year ago, the Mariners finished Cactus League play 16-13, four games behind the Giants. The A's, meanwhile, finished 12-21. This is an opportunity for the M's to get out to a quick start as they pursue the celebrated Golden Saguaro. Perhaps a month from now, it will be Ichiro and Felix Hernandez jointly hoisting the most painful trophy ever made.