I can't believe I'm still sitting here typing about the Cactus League because these things lose their novelty after the sixth or seventh game. The intrasquads were perfect because there were only four of them. I got to make my jokes and pretend to care, and then they were over. The Cactus League schedule isn't like that. I get to make my jokes and pretend to care, and then the first few games are over, and then there are a lot more games after that. It's a struggle. Oh no, the Mariners lost to the Cubs 12-7, what about the precious Golden Saguaro, what ever are we going to do. People look forward to pitchers and catchers. People think the day that pitchers and catchers report should be a holiday. Pitchers and catchers has its appeal and it has its significance, but that also marks the beginning of spring training, and the second half of spring training is so dull. For the players, too. Hong-Chih Kuo's like, "hey at least something interesting happened today."

Let's see. You know that the Mariners surrendered seven runs in the top of the first, and what that suggests is that the starting pitcher wasn't very good. Indeed, Jason Vargas wasn't very good, as he threw 40 pitches and retired all of two batters before coming out. Every run was earned. What this tells us about Jason Vargas is nothing. In his first start in 2011, Vargas allowed one run. In his second start, he allowed seven runs. In his third start, he allowed one run. There was a stretch in August and September during which Vargas allowed 3, 8, 2, 9, 5, and 1 runs. Weird things happen to pitchers, and weird things happened to Jason Vargas today. He felt good and he'll probably be fine, and so today was basically inconsequential.

The Mariners did all of their offensive damage in the first three innings against lefty Travis Wood. Ichiro homered in the bottom of the first, and that was a laser that zapped people in right field to bits. Chone Figgins lined out to center in the first, and in the second, he lined a triple over the center fielder's head, which is a sentence fragment I've already stitched into a pillow. The next inning, the Mariners tied things up when Jesus Montero and Kyle Seager hit back-to-back homers. This is where they went: 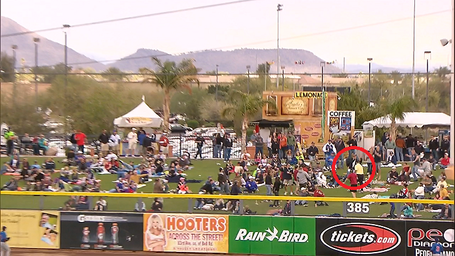 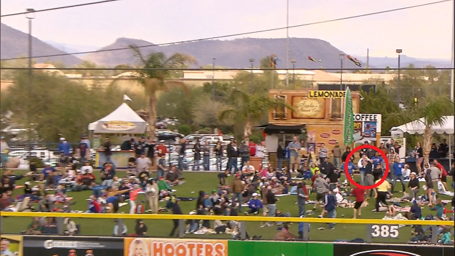 Pretty much the exact same spot in right-center. We're looking at the same fans. Montero, who's right-handed, launched that to the opposite field. Seager, who's left-handed, pulled that against a lefty. Encouraging things, both of those. The distance is good, and remember that Seager homered yesterday before the game was washed out by rain. He's showing power. He also hasn't walked yet, but he's showing power.

That's the big stuff. It's worth noting that Dustin Ackley walked twice, and that Justin Smoak reached base five times. Miguel Olivo and Michael Saunders went hitless, but Olivo frequently goes hitless, and Saunders is handsome. He's just a handsome man so he deserves a break on account of being handsome. Carlos Peguero lurched around in the dugout.

After the score was evened, the Cubs pulled ahead in the sixth on a double and a single. Then they piled on for some reason against Steve Delabar in the eighth. It's just like a classroom of immature young adults to take advantage of the substitute teacher. He was just doing the best he could do you guys. Another run scored in the ninth off Charlie Furbush when two people I've never heard of did two things that I've heard of back-to-back. The Mariners didn't rally, perhaps because they'd already demonstrated once that they can rally.