Share All sharing options for: Mariners, Giants To Interrupt Each Other's Practice

Welcome to the first-ever Lookout Landing blog post written in a press box. It's really distracting in here. There are two TVs, with sound. There are a couple dozen people, most of them talking. There's pop music on the speakers. There's a baseball field in front of me, surrounded by fans. I don't know how anybody ever gets anything done under these conditions. This single paragraph is taking me forever to write and all I'm doing is looking around and writing what's going on. Here's my proof of location, by the way. 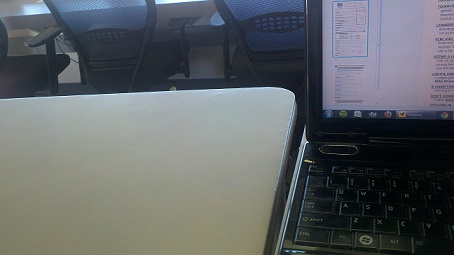 There's a field up there in front of the seats but I didn't want you to be able to see it because this way I feel more important. Guess what I can see and you can't! Or I didn't want to include it because then it would seem like I'm bragging. Accept either explanation, but probably not both.

Starting lineup! Let's do that now.

Hell of a lineup the Mariners are putting out there for me. By the way, I haven't linked Gameday yet, so here's me linking Gameday. The Mariners have Carlos Peguero and Mike Wilson flanking a center fielder who isn't a true center fielder. Good thing Erasmo Ramirez is a flame-throwing power pitcher who never allows much contact.

The Mariners are starting Erasmo Ramirez. It's going to be nice to have some PITCHfx data on him, and he's facing not the worst lineup ever built. After Ramirez will be less interesting pitchers. I didn't think we'd get to this point and Ramirez would still be in the mix for a roster spot out of camp, but here we are, and managers love strike-throwers. Ramirez has a chance, and that would not be dull.

In conclusion because I'm getting hungry, Barry Zito, all right!