Share All sharing options for: Saturday In Brief Review

Originally I wasn't planning on doing anything about Saturday's two baseball games, but for reasons that are so spectacularly uninteresting that my fingers won't even let me type them out, I've found myself with a little bit of time and a disinclination to sleep. So here's a very small amount of stuff about Saturday's two baseball games, limited to positive stuff because I don't want to send any of you into a depression spiral on the weekend. That's weekday shit.

What Was Encouraging
There were a few things that were encouraging. The Mariners didn't lose! Hisashi Iwakuma worked through four innings on 52 pitches, with PITCHfx clocking his fastball around 88-91. He generated grounders, which wouldn't be a bad skill for him to have with Brendan Ryan and Dustin Ackley behind him. Beyond that, in the third inning Michael Saunders blasted a double to the left-center gap. That's a legitimate opposite-field extra-base hit for Michael Saunders, and against a talented albeit unfinished pitching prospect. Ackley tripled although his hit was more of a low line drive to just the right spot.

Perhaps the most encouraging thing was this home run by Kyle Seager off Jamey Wright: 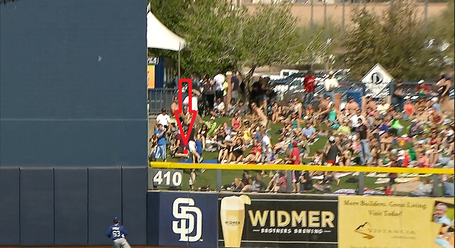 A few days ago, Seager hit this home run off somebody else: 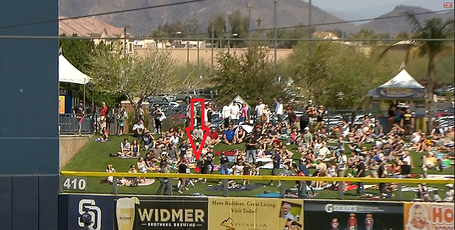 Those are long home runs. Those aren't mammoth home runs, and it's not like Seager, say, cleared the gigantic batter's eye, but that's impressive distance for a guy from whom you don't expect impressive distance. Even though it's Arizona, Seager seems to be stronger, which would make him all the more interesting.

What Was Encouraging
Still in first place! The big story out of the night game is the string of pitchers the Mariners sent to the mound. Erasmo Ramirez went first, then came Danny Hultzen, then came Taijuan Walker, and then came James Paxton, and the four prospects combined for eight innings, four hits, a run, three walks, and eight strikeouts. The Diamondbacks began with a lot of regulars, too, so it's not like the prospects were shutting down a B-squad. Ramirez threw 23 strikes out of 28 pitches. He and Hultzen both struck out Lyle Overbay. Walker struck out John McDonald and Willie Bloomquist back-to-back, which is impressive for a 19-year-old even if it isn't impressive ordinarily. Paxton struck out...minor leaguers, but strikeouts are strikeouts, and his velocity was good.

On the batting side, Munenori Kawasaki won't stop hitting singles. Jesus Montero launched a long double to right-center, and off Ian Kennedy to boot. (Ian Kennedy is really good.) Mike Carp reached base four times and drew a walk, with his two 2012 spring training walks exceeding his 2011 spring training total.

All right, hooray, pretty encouraging Saturday. Sunday baseball looms. At a more natural-feeling 1:05pm PT, what with the whole daylight and all. I'm kind of going to miss the 12:05s.