Share All sharing options for: The Latest CAIRO 2012 Projections

Hello there, baseball fans! Welcome to Lookout Landing. You are probably interested in predictions about the upcoming season. Sorry, you will not find that here. We don't really fancy predictions because the future is unknowable (for you) and so predictions are just excuses to engage in speculation and that makes us all blah really? We do have some projections though. Those are different. Please understand that those are different so that you might stop bitching about projections being wrong when it turns out they didn't exactly predict the future. You sound like a cretin when you do that.

Today's featured projection system is CAIRO. It's in all capital letters so I assume it is either an acronym or an initialism. I also don't consider those to be the same things. The official definitions are fuzzy but I believe we should have different terms for abbreviations that become words (radar, scuba) on their own and ones that are strictly letters (HTML, FBI). There are border cases though and something's weird about ones that become words but are still used in all caps like NATO. Compare that to Interpol which is a word now and also represents an organization but I feel comfortable writing Interpol in place of INTERPOL, but have to write NATO, not Nato. See how weird that looks? This is confusing. We need more terms.

So, CAIRO, whatever it stands for. Who cares? Here's the link to the latest crop. Looking over it I noticed that most of the good teams were good last year. That's not a big shock or even an aftershock, but it led me to making this graph. 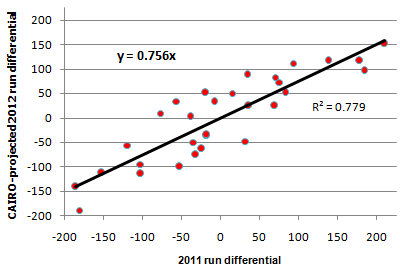 Notice the best fit equation. Hey look, it's regression! That right there is regression. It takes the magnitude from 0 from last year and spits back a little over 75% of that number. Another way of putting that is saying the 2012 projected run differential is three parts actual 2011 run differential and one part league average (0). Regression! Catch the wave!

The above chart doesn't do anything to identify which are the good teams and which are the bad teams. We're (not us we, people we) all about categorizing things into groups of preferably two. People like things in only two possible categories because "black or white" and "either you're with us or you're against us" is just so much less mentally taxing than actual reality. I will indulge it this one time.

Here are the remaining 13 teams. The terrible thirteen. I tried to come up with an alliterative and catchy moniker to saddle them with but I faltered in identifying an English word that's a synonym for bad and prefixed with a "th" sound. Any suggestions from linguists or other writers are welcome. It could even be a foreign word if appropriate enough. If you come up with one that I find delectable, I will bestow this...uh...free...pen on you. It's a wonderful pen. It has a clicky thing at the top and a good balance for twirling.

The Padres have the highest combined playoffs projections of any of those 13 and it's just 8.2%, which gives you a notion of the gap between these two groups. By the way, on average, American League teams had two more wins than their National League little brothers. Basically, that means the Mariners and the Padres are like the same team.