Twitter link here. Shannon states that it is a Major League deal which means that another 40-man roster spot will have to be opened up. It's weird because so far only Shannon has tweeted it. Usually when there's a transaction, my twitter stream has identical tweets from Shannon, Larry Stone and Greg Johns, followed by Rotoworld linking to those three and then MLBTradeRumors. So far, nothing but Shannon. I hope Larry and Greg aren't dead. Don't be dead, guys.

[11:48 UPDATE] Both Greg Johns and Larry Stone tweet that the Mariners have DFA'd Chris Gimenez and Mike Wilson to make room for Hong-Chih Kuo and Camp. Whew! Still alive.

Shawn Camp is a mid-30s reliever who's been with the Blue Jays for the past four seasons and unfortunately does nothing to add to the Mariners quota of ʃɔn given names. The righty throws a high-80s sinker, a low-80s change and a high-70s slider and succeeds probably how you'd expect, through a combination of ground balls and throwing strikes.

Up until last season, he'd been a quietly effectively bullpen arm. Over the last half-dozen years, Camp's xFIP has stayed in the 3.65-4.00 range, which is fine enough. He's not going to be a transformational figure for the bullpen, but building up depth there is not a bad thing and Camp is better than the pile-type additions we've become used to seeing. 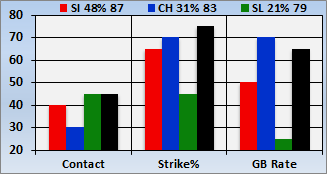 It's not all an adequate plate of noodles though. Since Camp's deal is that he needs to throw strikes, 2011 is a bit worrisome as Camp threw far fewer pitches in the strike zone last year than ever before. Now that didn't translate to a significantly higher walk rate and zone% by itself is not enough to worry about, but it is pause-worthy. Camp also saw his strikeout rate dip from below average (~17%) toward dangerously low (11%) territory which is worth even more pauses. Of course, all the normal warnings about a single year of relief pitching applies so don't freak out and go all Harold Pinter on us, but his fastball speed did dip a little so perhaps it's a harbinger of disappointment to come.

Camp is a bit of a side-tosser so he comes equipped with the enhanced platoon splits module that you really didn't want anyway but can be useful in some circumstances. In a certain light, Shawn Camp is the chiral George Sherrill. So hooray for probably many more mid-inning pitching changes this upcoming season. Those are fun, right? Everybody likes those!