Rumor was, there was a small handful of West Coast teams sniffing Kuo to see if they liked it. One of those teams was probably the Angels, since the Angels have long been searching for help in the bullpen. How could the Mariners compete with the Angels as a potential free agent destination? Here's how, courtesy of Dylan Hernandez:

Guaranteed money is how. Given what he went through in 2011, it would've made a lot of sense for Kuo to end up signing a minor league contract. The Mariners made a commitment, and while I'll freely admit that this is speculation, I wouldn't be surprised if that's what put the Mariners over the top. One notes that this signing isn't yet official, but that isn't reason to believe that Hernandez's source is wrong. We knew about Kevin Millwood before that was official. We knew about Munenori Kawasaki before that was official. We learned about Darren Ford from his sister, and so on. It's just about an absolute certainty that Kuo has signed, and that all that's left is troubleshooting the fax machine, or writing up the press release.

Or identifying somebody on the 40-man roster to ditch. As Kuo is signing a Major League contract, the Mariners will have to make room, seeing as how their 40-man roster is currently full. Mike Wilson is one option to go. Cesar Jimenez is another option to go. The Mariners could return Rule 5 pick Lucas Luetge, I think. It shouldn't be hard to fit Kuo in. If it were hard to fit Kuo in, that would imply that the Mariners have too much high-level talent. Good news!

With the Internet being what it is today, and since we heard about Kuo before, I don't really have much in the way of new material for this. Most of what needs to be said about Kuo has already been said. I guess nothing really needs to be said about Kuo. "Need" is one of those words on which people carelessly trample like a Mount Rainier wildflower. If you're all about volatility and high potential reward, Kuo's a neat fit. He could be terrible, like he was last season. He could bounce back from his anxiety and his elbow problems and be amazing, like he was the season before. Kuo could quite literally pitch to either extreme, and I'd much rather the Mariners sign a guy like this than, say, a guy like Jamey Wright or Luis Ayala. The upside is considerable, and the downside is practically irrelevant. If he's bad, oh no, the Mariners might miss the playoffs!

Since I've little more to say, here are a few Kuo factoids:

Tsao said he faced Kuo a few times in high school but never gave him any pitches to hit.

"I wouldn't throw him any strikes, because he was always trying to hit a home run," Tsao said. "He still reminds me about his team winning the championship." 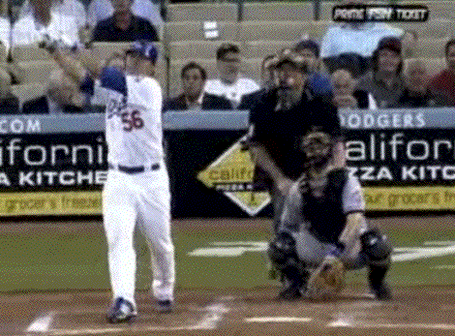 (4)
For his career, after getting ahead 0-2, Kuo has one walk and 136 strikeouts. That walk was issued to Adam LaRoche with the bases loaded.