I feel bad when I write about Anthony Vasquez. I don't feel bad about the material - the material is fine. I feel bad because, what if Anthony Vasquez is reading this? Anthony Vasquez knows full well how terrible he was as a Mariner. He was there. I'm just piling on. Opening old wounds. Anthony, if you're reading this, understand that I mean nothing personal. I'm sure you're a great dude, and I hope you bloom into an ace. It's just that the numbers you put up are quite literally among the worst numbers ever posted. It's interesting to look at them and write about them.

Allow me to set the scene. The Mariners were bad. The Rangers were good. Vasquez came in with an 8.25 ERA, while opposing starter Matt Harrison came in with a 3.42 ERA. Going into the bottom of the second, the game was scoreless. Then Michael Young singled. Then Adrian Beltre homered. It was 2-0 Texas.

Mike Napoli followed with a line out that looked like this: 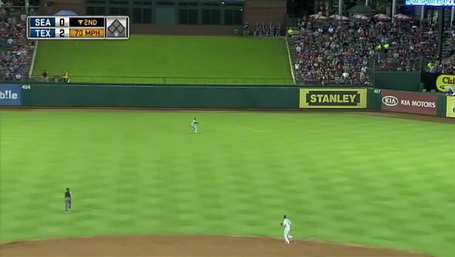 Then Nelson Cruz singled. Then David Murphy walked. Vasquez got ahead of Craig Gentry 0-2, but then he beaned him. The bases were loaded with one out for Ian Kinsler. The game was on the verge of getting out of hand.

Treading desperately in hot water, Vasquez went after Kinsler with an 84mph fastball. 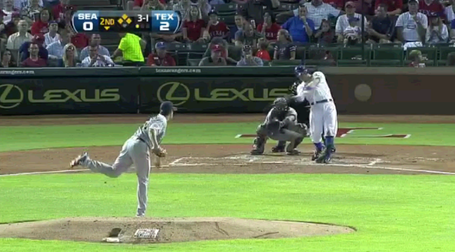 It worked. Something worked.

How did Vasquez respond to his achievement?