A Little Change For Vinnie Catricala

Share All sharing options for: A Little Change For Vinnie Catricala

It was almost exactly a month ago, when I was driving up to Seattle for the Mariners' pre-spring training media luncheon, that the Mariners announced a group of non-roster organizational players who were getting an invite to camp. Most of them were prospects, like Taijuan Walker and James Paxton and Nick Franklin. One of them was Vinnie Catricala. And, interestingly, right there beside his name were the letters "OF". The Mariners were presenting Catricala as an outfielder, which came up a few times after the media had all gathered together.

This was notable because, as those of you familiar with the system already knew, Catricala had previously spent most of his professional time at an infield corner. Catricala's been in the Mariners' system for three years. Over that span he's played 133 games at third base, 88 games at first base, 58 games in left field, and one game in right field. It looked like the Mariners were moving him.

Well now we have this and I'm not entirely sure what to do with it:

Mariners shift Vinnie Catricala from OF to INF on their roster. They will now be looking at him at 3B for most of spring. Who can blame em?

A month ago, the Mariners had Catricala listed as an outfielder. Now, after a few practices and a couple intrasquads, they're treating him like a third baseman. I don't know what changed their minds, or how much this even matters, but it's a little bit curious if nothing else.

The issue with Catricala is not his bat, as scouts and statistical analysts agree that he has a good bat. The issue is his defense, which you might've figured from the fact that we're talking about his position. It doesn't help that this is one of the first results when you Google image search his name: 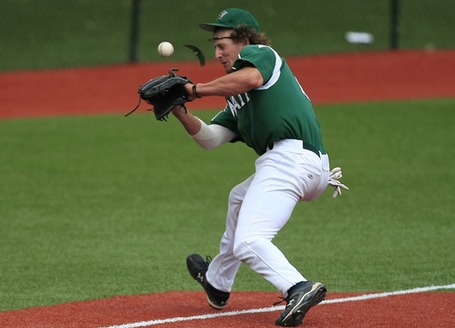 I have my Baseball America Prospect Handbook sitting right next to me, and here's what they have to say on the matter:

No. Nope. Not any position. The answer to the question "which is Vinnie Catricala's best position?" is "none of them." He would be worth negative runs as a DH. He is literally a worse defender than a small cup of milk.

BA isn't actually nearly that hard on Catricala, although that's a paragraph I wouldn't put past Baseball Prospectus. But Catricala has work to do. It's not a coincidence that his positional future seems to be unsettled.

I'm all about the Mariners seeing if he can get up to passable level at third. The long-term in-house options at third base all have major question marks, so it makes sense to keep Catricala a possibility. But Alex Liddi is getting reps at first because Francisco Martinez is expected to play third in Tacoma. What's Catricala going to do? Is he going to bump Martinez? Is he going to play third in the spring and then play the outfield come April? In that event, why not just put him in the outfield now?

I'm going to stop myself now, before I read too far into this. It's a tweet from early in spring training. It might not mean very much, just like most tweets from early in spring training. But I guess the upside of this post is that it reminded you about Vinnie Catricala, who last season put up a four-figure OPS. He's a prospect who's starting to get more and more attention, and he's a prospect who deserves it.