Brendan Ryan hit a home run off Oliver Perez and subsequently didn't run the bases. He just turned around and walked back to the dugout. Every part of this is my favorite. One interpretation is that Ryan doesn't know what a home run is, and so he wasn't sure what to do. Another interpretation is that Ryan wanted Perez to feel as bad as possible. The actual correct interpretation is that Ryan didn't want to rub it in Perez's face and figured the homer would've been a fly out in Safeco, but they don't hold spring training so that players can just walk around and do whatever they want. Ryan was supposed to jog, and he didn't jog. Look for Eric Wedge to make Ryan do some disciplinary circular jogging over the weekend.

Geoff Baker snapped this awesome picture of Alex Liddi after he struck out: 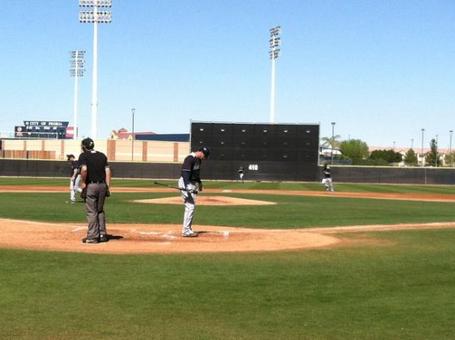 Carlos Peguero went 1-for-4 with a strikeout and a broken-bat triple, which pretty much nails him right on. Michael Saunders doubled, and given how many of us feel about Michael Saunders and given how his career has gone to date, that's neat, and Saunders should put the ball on his mantle. I hope you don't mind that I'm not distinguishing between which Mariners players played for which Mariners teams. Hong-Chih Kuo walked two guys in one inning, so it looks like he's resolved nothing and is a certain failure. Taijuan Walker threw a 1-2-3 inning with two strikeouts. It's almost impossible to find anything even remotely critical that's been written about him in the last few months. He could be something special. He is something special, to his family, but he could eventually be something special to us.

Glad to have baseball back. The meaninglessness of this game and some of the players involved make today feel kind of like September. The season just flies by!