I remember that a lot of us were thrilled when the Mariners traded Erik Bedard this past July. Granted, part of that was because we weren't sure if Erik Bedard would be traded at all, and part of that was because the initial Erik Bedard trade rumor was less than impressive. And many of us liked Erik Bedard the pitcher. But then when we heard about the three-way deal, we were pleased. Not only were the Mariners getting a diabetic 23-year-old making mincemeat of double-A; they were getting another 23-year-old by the name of Trayvon Robinson who was lighting it up a level above. Not bad for two months of an unreliable starting pitcher who wasn't coming back.

There was a lot to like about Robinson. He was young. He was performing at an incredibly high level. He was laden with tools. Reports said he had decent discipline. He could play center field. He could switch-hit. Robinson was an exciting prospect to receive.

But there was this one thing. This one big flashing yellow caution light. This one big flashing yellow caution light that didn't just flash but also repeated "HEY, CAUTION" through a speaker. Robinson had trouble making consistent contact. With Albuquerque, he had 122 strikeouts in 416 plate appearances. And with Albuquerque, he had a contact rate of 65 percent. The average contact rate in the Majors is about 81 percent. In between his line drives, Robinson was whiffing in triple-A.

That was a cause for concern. And, unsurprisingly, Robinson brought his contact issues with him to the bigs. Over 155 Major League plate appearances, he struck out 61 times, with a contact rate of 66 percent. He had a .586 OPS. There were good moments, but there were many more bad moments.

When you have a prospect who swings and misses too often, the automatic suspicion is that he swings at too many bad pitches. An interesting thing about Robinson is that, with Seattle, his judgment wasn't bad. Here's Robinson against the league average:

Trayvon Robinson posted a higher swing rate than the league average, but the majority of those extra swings were coming against strikes. It's not like he was going fishing all the time. He wasn't Carlos Peguero. The trouble was that he still couldn't make much contact. He posted one of the lowest contact rates in baseball against pitches in the zone. And he posted the very lowest contact rate in baseball against pitches out of the zone. Be wary of small samples, and all. 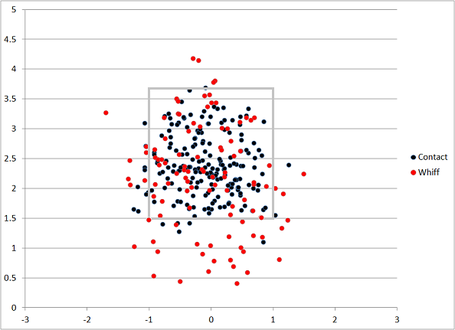 Robinson didn't chase a whole lot up high. He didn't chase a whole lot to either side. Then you look down. Robinson chased down low. He chased down low and whiffed almost every time. This was a clear vulnerability of his, and while I don't expect Trayvon Robinson or any player to have a perfect eye, this could stand to be improved, lest it be exploited.

In a sense, Robinson was raw. In a sense, he showed some polish. He didn't chase as many bad pitches as a lot of rookies do. But Robinson didn't make enough contact in the minors in 2011, and he didn't make enough contact in the Majors in 2011. This is what is currently holding Robinson back. It's a significant thing and not an easy fix. I don't know what's at the core of Robinson's contact problems but until or unless he gets them sorted out at least in part, he's destined to be no more than a 25th or 26th man. A guy like Robinson needs to hit the ball more than Robinson hit the ball.