Now Jeff's Friday fun fact looms prescient, which it was not, as Mike Cameron notified the Nationals this morning that he is retiring from baseball.

OF Mike Cameron has notified the Nationals he will retire, bringing his impressive career to an end...Spring Training roster now at 54.

It's not altogether surprising since he was on only a Minor League deal and the Nationals have a crowded outfield, but it's... I don't think sad is the word since Cameron is leaving mostly on his own terms and in (assuming) good health and having made a fortune. His talents were often hindered in being fully recognized by the parks he played in. I have a feeling that in the greater context of baseball history, he will remain under appreciated, but I have also never seen anyone speak poorly of him and that counts too.

Goodbye, Mike. I wish the team I root for hadn't been so dunder-headed that they didn't see the value in keeping you here. 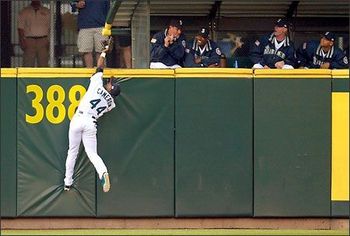