The Mariners' Five Worst Swings Of The 2011 Season

Share All sharing options for: The Mariners' Five Worst Swings Of The 2011 Season

For those of you who read my post about the most extreme pitches hit for home runs during the 2011 season, this post is obviously inspired by that one. Earlier today I already put together and published the Mariners' version of the home run post. This is a joke about how the Mariners didn't hit any home runs. Here I want to examine something more Mariners-appropriate. I decided something more Mariners-appropriate would be bad swings.

Below you will find the five worst pitches at which a Mariners batter swung last year. For our purposes, the five worst pitches are the five pitches the furthest away from the center of the strike zone. I guess you could argue that these aren't actually the five worst swings, since there could've been just horrible swings at regular pitches. Maybe a guy fell down. But I would argue that the worst swings are the swings with the lowest chance of succeeding. Swings at pitches way out of the strike zone are probably the swings with the lowest chance of succeeding.

"This is pretty negative, Jeff," you might say. So were the 2011 Seattle Mariners. Did you watch the Mariners? Did you continue to watch the Mariners long after they faded away from relevance? I did. I watched them through to the bitter fuckin end. I'm entitled to treat their 2011 season however I want, and at the moment this is how I want.

You might assume that a countdown of the 2011 Mariners' five worst swings would be 100% Carlos Peguero. You'd be wrong. It's only 40% Carlos Peguero, which is twice as high as anybody else. It's 0% Miguel Olivo. You wouldn't believe how many times this made me re-check the data. 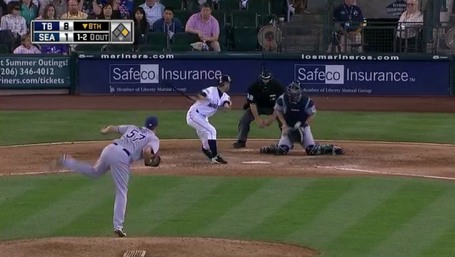 Ichiro seems to have one of these every few games. Always has. Before, we laughed them off. "Haha, he's deceiving them into thinking he's mortal." "Next time I bet he'll get a hit on that!" This has long been a part of the Ichiro experience. But with the other bits of the Ichiro experience possibly changing, these don't stand to be nearly so cute going forward. "THAT'S A BALL" "HOLY SHIT HOW DO YOU STILL NOT KNOW THAT THAT IS A BALL, YOU ARE 38 YEARS OLD AND VERY EXPERIENCED" 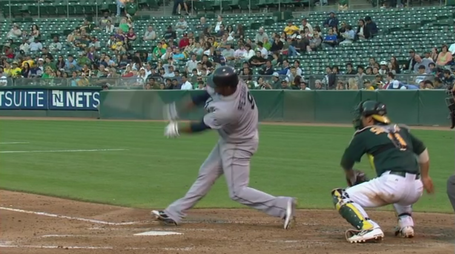 The side view replay really drives home just how bad a swing this was. Not only did Peguero swing at a bad pitch. You see the ball? You see how it's angled up? That's because it already bounced. As shown in this screenshot, Peguero's bat had long since cleared the zone before the ball even arrived. So the eye was wrong, and the timing was wrong. I know those two things aren't independent of one another but still, wow, so wrong. When this replay began, Dave Sims thought it was a replay of an impressive foul ball Peguero had hit earlier. Instead it was a replay of Peguero striking out on a terrible pitch. That's the essence of Carlos Peguero right there. 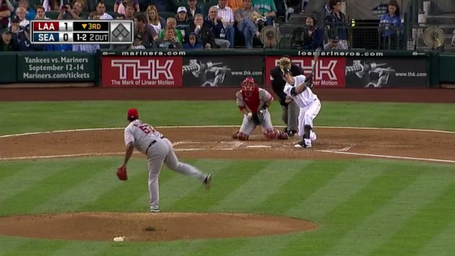 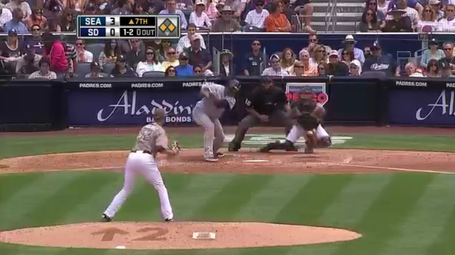 Right before this swing and miss, Peguero fouled off two or three hanging breaking balls smack dab in the zone. This was Peguero's 11th start. He would make 32 more starts. For the duration of the Mariners' fling with contention, their regular in left field was Carlos Peguero, and not Mike Carp. Carlos Peguero might be the weirdest decision I can remember the Mariners making. I don't just mean last year. What's been weirder? 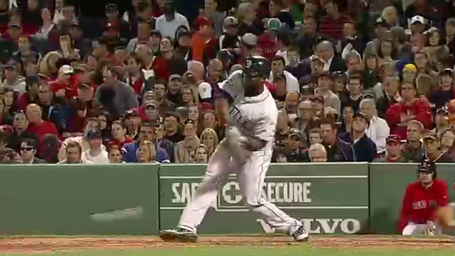 Checked swings are still swings, sometimes, and while it's kind of a bummer that the countdown has to end like this, we're talking 49 inches. The runner-up came in at 43.9 inches. This was so far and away the worst swing of the Mariners' season that I'd feel worse if I didn't include it. With this strikeout, Bradley extended a hitless streak to 20 at bats. A few days later, he was ejected and suspended for arguing a play in which he wasn't involved. A few days after that, he was ejected for arguing a called strike. A couple days after that, he was designated for assignment to make room for Carlos Peguero. And that's when things got ugly.