During the baseball offseason, certain players become free agents, able to sign with any suitor. In this current 2012-2013 offseason, one such free agent was 29-year-old starting pitcher Brandon McCarthy, formerly of the Oakland Athletics. It was determined that McCarthy would be a good fit for the Seattle Mariners, and so the author set out to encourage McCarthy to join the Mariners by way of direct daily interaction. This contact was approximately one month in duration. At the end of the trial, McCarthy opted to join the Arizona Diamondbacks, and there was no indication the Mariners were in play. It is determined that Twitter interaction is an insufficient means for guiding human behavior within the free-agent market.

The Seattle Mariners entered the 2012-2013 offseason with question marks regarding their starting rotation. One open spot was filled upon the re-signing of Hisashi Iwakuma, but still there was left an open fifth spot, tentatively occupied by 23-year-old right-hander Blake Beavan. Beavan would be easily improved upon, and the Mariners are in a position to spend a significant amount of money on roster improvements.

Available as a free agent was 29-year-old right-hander Brandon McCarthy. Over the previous two seasons, with the Oakland Athletics, McCarthy started 43 games, posting a 3.29 earned run average. McCarthy represented a potential upgrade over Beavan, and he was determined to be affordable and acquirable. Additionally, he was familiar to the organization, having previously pitched for divisional opponents. Though McCarthy has certain known health risks, his performance upside is thought to be considerable.

Within baseball circles, McCarthy has become fairly well-known, owing to his active and popular Twitter social media account. It is on Twitter that McCarthy often posts humorous messages or interacts with fans. It was determined by the author -- a fan of the Mariners -- that McCarthy might be persuaded to sign with the Mariners if instructed to do so, repeatedly, online. In this way the author intended to play a role in the improvement of his favorite baseball club.

Toward the beginning of November, the author developed a novel, experimental method designed to lure McCarthy to the Mariners organization. The experiment was carried out for one month before results were achieved. No experiment of this sort has ever before been attempted.

McCarthy could be found online at www.twitter.com/BMcCarthy32. The author could be found online at www.twitter.com/LookoutLanding. The platform allows for communication between any two parties, and the author communicated to McCarthy the words "Seattle Mariners", or some variation thereof, on a daily basis, beginning on November 8, 2012. The experiment was concluded on December 7 of the same year. With rare exception, there would be one message sent on each day.

Message delivery would be targeted for seemingly slow periods, so that the message would be received and understood without being buried. There was no specific time of day, each day, that the experimental message would be sent. On occasion, the content of the message would be tweaked, so as to better capture attention. It was determined by the author that sending the same message at the same time each day would likely be ineffective, due to predictability and ease of disregard. It was always to be clear that the focus of the message was on the Seattle Mariners baseball club.

Messages were sent using, most often, a laptop, and, less often, using a mobile phone. Outside of the daily message, there was to be no further interaction between the author and the subject. Message delivery could be confirmed, but it could not be confirmed whether the message each day was read. No break was taken for the Thanksgiving holiday. No thought was given to tying in the subject's spouse, who is also famously available on Twitter. Interaction was to be between the author and the subject, only. 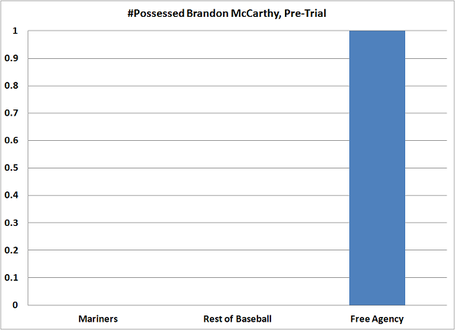 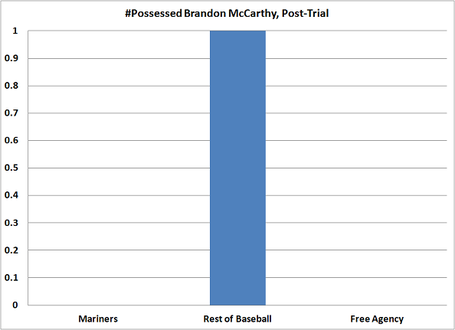 The goal of the experiment was to compel Brandon McCarthy to sign a free-agent contract with the Seattle Mariners. On December 7, it was announced that McCarthy had signed a free-agent contract with the Arizona Diamondbacks, and not the Seattle Mariners. There was no indication of interest between McCarthy and the Mariners, and it was later confirmed that the Mariners never attempted to reach McCarthy or his representation. McCarthy was given a two-year contract worth $15.5 million -- an affordable sum, by the Mariners' presumed budget. In this way, the experiment was a failure.

There are a number of reasons why this may have been. First and foremost, on the date of December 6, the author traveled from Nashville, TN to Portland, OR, and neglected to send to McCarthy a single message. An attempt was made on December 7 to make up for this by sending duplicate messages, but within a short amount of time, word of McCarthy's agreement with the Diamondbacks broke publicly. It is possible that McCarthy interpreted the lack of a message on December 6 as a sign of the Mariners' disinterest.

Additionally, while the author made a point of reaching out to McCarthy each day, several others outside the realm of the experiment shortly began to mirror the author's attempts. Teams that were suggested to McCarthy in addition to the Seattle Mariners included the Oakland Athletics, the Minnesota Twins, the Pittsburgh Pirates, and the Toronto Blue Jays, among others. This unwanted public involvement might have compromised the integrity of the trial. The author was helpless to prevent other individuals from intervening, which they did over time with increasing frequency.

McCarthy did on occasion respond to the experimental messages, most often by "favoriting" them, using a particular Twitter function. At the beginning, McCarthy was unclear as to the purpose of the messages, but clarity was achieved within two days' time. it cannot be ignored that the experiment has a sample size of one professional baseball player. In this instance, McCarthy could not be steered to the Seattle Mariners. This is not to say that the experiment had zero effect, or that it would have zero effect on a greater number of subjects; it simply did not have the full desired effect on Brandon McCarthy. Further trials might be in order, so as to better evaluate the efficacy of the method.

The author attempted to bring about a marriage between the Seattle Mariners and free-agent pitcher Brandon McCarthy by interacting suggestively and persuasively with McCarthy through social media for approximately one month. No such marriage was achieved, as McCarthy signed with the Arizona Diamondbacks. The Mariners never chose to contact McCarthy or his agent during the experimental window. It is determined by the author that you can't make professional baseball players make certain important career decisions by tweeting at them.

The author would like to thank Brandon McCarthy for his involuntary participation, and for never going so far as to file or attempt to file a restraining order. The author wishes McCarthy the best of luck going forward in Arizona, where there exist baseball fans numbering in at least the several dozens.