To be fair, I wasn't tracking this category all year long. I hadn't even invented this category until a few minutes ago. But I feel pretty damn certain about the winner.

Because everybody wants to be able to trade for Giancarlo Stanton. Stanton belongs to one team, and the other 29 teams might literally kill to have him on their rosters. Stanton is 23 years old. He's newly 23 years old. The last two years, he's been a top-ten hitter. He has more strength than maybe anyone in the game, he's four years from free agency and a year from even costing seven figures, and he's publicly expressed his displeasure about the Marlins' situation. The Marlins' situation is such that they're not particularly close to contention, having unloaded almost all of their high salaries, again. The Marlins say they're not motivated to trade Stanton, of course, but he's going to start getting real expensive by the time the Marlins are back to thinking seriously about the playoffs and the post-playoffs fire sale.

Once the Marlins made it clear that they were tearing things down, there was every reason for every general manager in baseball to place an inquisitive phone call. Why not? General managers make lots of phone calls to other general managers. And because the Marlins are just cheap and not stupid, they understand that Stanton is one of the game's most incredible values. The haul it would take to land Giancarlo Stanton in a trade is almost inconceivable. Just because the Marlins are at the ass end of the winning cycle doesn't mean they aren't in position to demand the moon and some of the stars, but probably not all of them, what would you do with that many stars

Mariners have contacted Marlins about Giancarlo Stanton, but one source I talked with doubts a trade will occur.

8:28pm Pacific, December 31, 2012. Which means 11:28pm Eastern. Congratulations, lil tweet. You came in out of nowhere, and you forced me to invent an Internet trophy to recognize your pointlessness. 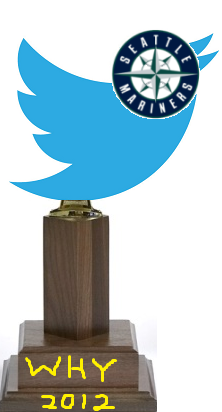