Jose Lopez began his major-league career in 2004, and over the whole span, he's slugged 92 dingers. The biggest of them, at least by win probability added, was a grand slam he hit on April 23, 2010, off J.J. Putz with the Mariners down 5-2. The next-biggest was a three-run homer he hit on May 17, 2012, off Steve Delabar with the Indians trailing the Mariners 4-1. There were two outs and two on at the time, and then Delabar made a mistake behind 2-and-0. Lopez, naturally, yanked the ball over the left-field fence. I remember thinking that day "I can't believe the Mariners just got killed by Jose Lopez." And I also remember thinking that day "I didn't know Jose Lopez was in the majors."

Not long ago, at FanGraphs, I wrote about the fastest pitches hit for home runs during the 2012 season. The fastest pitch hit out was hit out by Tyler Greene, who also hit out the slowest pitch that was hit out, which is weird. The second-fastest pitch hit out was hit out by Jose Lopez, off a 100 mile-per-hour fastball from Aroldis Chapman. That happened in the middle of June, and, naturally, Lopez pulled the ball. This past season, Jose Lopez was in the majors, and he hit some dingers of some minor significance. Not that anyone remembers. Jose Lopez has been on nobody's radar.

There's no structure to this post. I tried to give it some structure and nothing good ever occurred to me. Here are some facts about Jose Lopez.

The really disappointing thing is, before we learned that Lopez is going to Japan, it seemed like he was going to Houston. The rumors were unclear. Minute Maid is just built for Jose Lopez, almost specifically, and if you don't remember why, here's Lopez's 2009 home-run chart, from the ESPN Home Run Tracker: 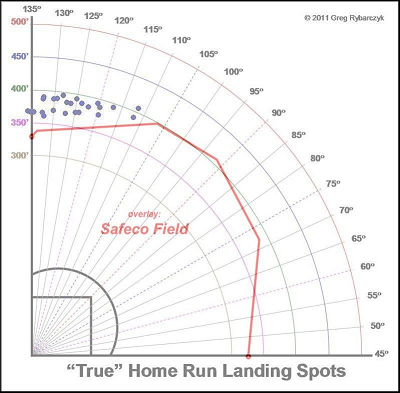 Let's put that in Houston: 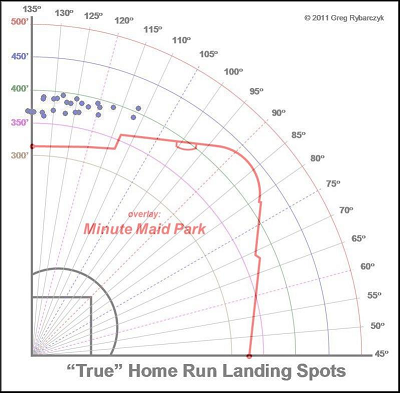 It's possible that the Astros could save Jose Lopez's big-league career by letting him thrive in their home ballpark. They could even put together something of a weird home-road platoon, in order to maximize Lopez's value in what's going to be a lost, dreadful season. But it turns out the Astros aren't interested, which is why Lopez is going overseas. Even the Astros have their standards. Even the Astros know which trees to bark up.

Not that Lopez deserves a shot to play in Houston. That would just sate my own curiosity. He's already had a chance to play for Colorado, and he's already had an admittedly limited chance to play for Chicago, so he's been in hitter-friendly ballparks after the Safeco chapter. Lopez left the Mariners in December 2010, in exchange for one Chaz Roe. Since then he's been a member of four different organizations. It was pretty obvious why Lopez arrived in the majors so quickly; it's pretty obvious now why Lopez can't stick in any one place.

Jose Lopez's career path isn't unique. Hell, the Royals released Yuniesky Betancourt in the middle of August, and he's still unemployed. His agent insists that Yuni will sign a big-league contract before long, but it's possible his agent heard "interested" when what the guys on the phone said was "not interested". Players have failed like Lopez before, and more will do it down the road. Sometimes players don't follow the paths that seem obvious for them.

But Lopez was a prospect, then a talented player, then a pretty good player, then a bad player, all before turning 29. I'd say it was inevitable that he'd end up in Japan, but that wouldn't be fair, because the Japanese don't take just anyone, and this doesn't feel as obvious as the Wily Mo Pena transition. Wily Mo went to Japan to play and get paid. Lopez is going to Japan to play, because he doesn't know what else to do. He's burned through too many organizations stateside.

A takeaway lesson is that good young players don't always improve, or even stay the same. They can't be taken for granted, even though sometimes they can feel like baseball's most stable assets. I don't need to remind you that Lopez and Yuni were supposed to be the Mariners' middle infield of the present, the near future, and the distant future. It's the distant future now, from then, and we're all more fortunate with the current state of things. Given that lesson, it's hard to pinpoint what went wrong. It's easy to say that Lopez wasn't motivated enough, and maybe that's true. Alternatively, maybe he was motivated but also a poor student. Maybe he got some lousy advice. Maybe he just came apart for reasons out of his control. Maybe Lopez's statistical career path doesn't reflect Lopez the person and Lopez the professional.

But it sure seems like the motivation thing. This is sort of the reason the Mariners signed Raul Ibanez. Ibanez, more than anything else, is supposed to be a hell of a role model, a great positive example, and the Mariners hope that their young players can learn from Ibanez how to conduct themselves and make themselves better. Of course, Lopez played on Mariners teams with veteran leaders, and so did Betancourt, and that's why these things are tricky and unpredictable and hard to believe in. Young players, probably, can't be sustainably motivated by someone else. The fire needs to burn within, and only the individual player can keep his own fire burning.

FanGraphs splits the playing field into even thirds. Out of Lopez's 92 career home runs, one was hit to the opposite field. It was hit on September 24, 2006, off Neal Cotts in Chicago. It had a distance of 344 feet, but it also gained 28 feet from the wind, as that was a windy day, with nine home runs in all. Under standard environmental conditions, says the ESPN Home Run Tracker, Jose Lopez's opposite-field home run would have left zero ballparks.

You could say that Jose Lopez has stayed true to himself. You can see where that got him.