Now Jason Bay Has A Face

Share All sharing options for: Now Jason Bay Has A Face

The Jason Bay-Seattle Mariners rumors had been there all offseason long. Things finally came together early last week, during the winter meetings in Nashville. But the Mariners wouldn't acknowledge it, because nothing was official, because the Mariners still had paperwork to fill out and a Rule 5 draft to pass by. It's club policy, I guess, not to talk about these things, even if they're all but complete. In listening to Jack Zduriencik in Nashville he almost made a game of not addressing the Jason Bay story. He'd say something vague and evasive with this little grin on his face. But everybody knew the news was coming, and over the weekend, the news finally came.

On one hand, it isn't very important, because Bay is only a very minor piece, and he's cheap, and he hasn't actually made the team yet. Jason Bay doesn't mean the Mariners are going to stop looking for hitters, hitters who are good and who can play every day. On the other hand, it's perplexing, because Bay doesn't seem to fit with the roster as it's constructed. He was terrible in 2012 and not very good in 2011 and 2010. As we've discussed, the last time Jason Bay was good was the last time Chone Figgins was good, and the Mariners just got rid of one of those. People were happy about it! The Chone Figgins announcement was the most popular posting in the history of the Lookout Landing Facebook page.

It doesn't take a lot of effort to analyze Jason Bay. According to his FanGraphs page, he was worth five wins over replacement in 2009, when he was last valuable. Then one and a half, then less than one, then less than zero. Bay is not considered a very good defensive outfielder. He's 34, he's got injury and concussion question marks, and he hasn't looked anything like a guy who slugged 36 dingers, and 31 dingers the year before that. According to the numbers, Jason Bay doesn't add value. Not to a Mariners team that already has Casper Wells, who can play all over the outfield. According to the numbers, this is a nothing transaction. End of story. In 2009, Chone Figgins was good. In 2009, Scott Kazmir was bad, but he had recently been good. In 2009, Franklin Gutierrez stayed healthy. The past is not able to be captured in the present.

Statistically, it was easy to dismiss the Jason Bay acquisition. But now. Now, Jason Bay has a face. Bay went down to Safeco and met with the media, and it turns out he's this whole person. He has an appearance and family and words that he knows how to pronounce. Jason Bay is a guy who used to be good who's just looking for a fresh start. 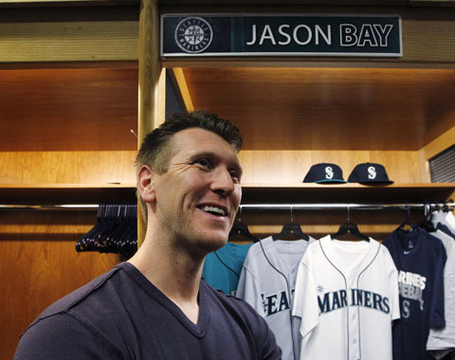 Now things get complicated. Logically, they don't get any more complicated -- there was never any question that Jason Bay exists. But now things get emotionally complicated, or psychologically complicated, however you want to put it. Things are always harder to kill after you give them a name. Players are harder to outright dismiss after you give them a face and personality and can-do attitude. That Jason Bay, he seems all right. Wouldn't it be great if he could turn things around? Isn't it possible that New York just wasn't the right fit?

You see Bay, you listen to Bay, and you develop feelings for Bay you don't develop by just looking at statistics. I don't mean romantic feelings, probably, but feelings begin to exist and they interfere with all the numerical facts. I don't know about you but I spent a small chunk of today searching and digging for reasons for optimism. A week ago, there was no question in my mind that Bay didn't make sense. Now I'm more willing to squint.

I mean, his plate-discipline numbers are fine. Sure, he's not a contact hitter, but he wasn't a contact hitter in 2009, either. He doesn't make a habit of chasing bad pitches. Do you know what Bay's BABIP was last season? .185. .185! His career mark is .317! Of course Bay will regress up. And look at those eight homers in limited time. Navigate to StatCorner. Last year, Bay went deep on 12 percent of outfield batted balls. That's right around where he was in 2007-2008. After 2008, of course, came Bay's 2009. Look at this. Look at it. That's a monster home run, to the opposite field, off Cliff Lee, this past April. Look how easy Bay made it look! Does that look to you like a baseball player who's finished? That looks to me like a baseball player who can hit some dingers.

Of course, look how easy Chone Figgins made this look, this past April. Does that look to you like a baseball player who's finished? As a Mariners fan, you probably feel like Chone Figgins is finished. You can't just select a player's best highlights and ignore all of the footage that didn't make it into the highlight reel. All major-league players present and recent past are capable of good. It's a matter of frequency, and Figgins did good infrequently. So did Bay. Almost equivalently infrequently, as it turns out.

The numbers are the thing, because the numbers don't lie, and the numbers don't like Jason Bay. The numbers don't understand why Jason Bay is on the Mariners now, and the numbers suggest that Bay won't still be on the Mariners by the end of next March. The numbers think that Jason Bay is old and eroded. But now we've seen Bay, and we've listened to him, and we've listened to the Mariners talk about him. Bay didn't seek the Mariners out. The Mariners sought Bay out, at the GM meetings in California. The Mariners don't want to talk about Bay's past, and neither does he. He wants to contribute in 2013, and darn it he seems so nice and sincere. What if Bay does work out? Oliver Perez worked out. What if Bay does work out? Jeff Cirillo and Scott Spiezio worked out, elsewhere, after Seattle. Is it that unlikely that Jason Bay works out? Doesn't it seem like he might finally be comfortable? He swears that his body is at 100 percent.

Not everybody will go through this little struggle. Some people are better able to just focus on the numbers almost exclusively, and sometimes that's a feature and sometimes that's a bug. The numbers tell one story, just as the numbers tell one story for Figgins. But when Figgins signs somewhere else, people are going to look for the positive. Figgins is going to say the right things and he'll be relieved to have a fresh start of his own. It probably won't work out, but it might, and you want it to. We want it to, for Bay. Those other people will want it to, for Figgins, since he's not some unlikable ass.

Jason Bay does not seem good, and he certainly does not seem like a fit. But Bay appreciates this chance, and he's been through a lot, and now he's come home, and he just wants to help. Sometimes it's a real treat to have human feelings, sometimes.