Share All sharing options for: Chone Figgins Designated For He's Gone Everybody

This morning, the Mariners traded Trayvon Robinson for Robert Andino. This evening, the Mariners designated Chone Figgins for assignment. In terms of win impact in 2013, the moves are basically the same. This second one still feels a little different.

I thought it was so cool, late in 2009, when Dave Cameron asked if I wanted to contribute to the Maple Street Press 2010 Mariners Annual. He was the editor and it was our first go with something like this, and of course I agreed to help out however I could. It was going to be printed and sold in bookstores! Bloggers have always known the Internet is the future, but bloggers also always get a thrill from actually being physically published. I helped Dave with some editorial stuff, and I also contributed two feature articles. One was about the importance of defense. The other was titled Power Is Overrated, and subtitled Why Chone Figgins Is Better Than You Think. Look, I'll prove it. 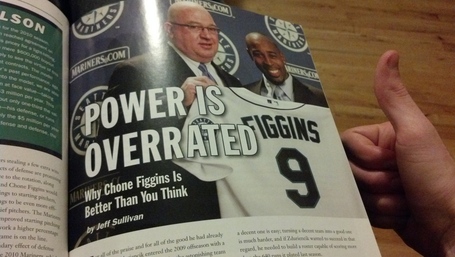 Look at how happy Chone Figgins was. Jack Zduriencik actually looks a little uneasy, which one could retroactively interpret as foreshadowing, but I don't know what a happy Jack Zduriencik looks like. Have you been paying attention to the Mariners during the Jack Zduriencik era? Anyway, below, some excerpts:

If we've learned anything since the autumn of 2008, though, it's that you should always trust Jack Zduriencik.

Figgins has blossomed into quite the little player, and it's fair to say that Jack Zduriencik and the rest of the Seattle front office are well aware of it. He is annoying on the field, but as an annoying player with a lot of ability and the sort of athletic skill set that has historically aged really well, he's the kind of guy you're happy to see wearing your team's colors.

...Chone Figgins...is a terrific overall third baseman getting paid less than he deserves, and as such, he's just another one of Zduriencik's excellent investments as he lays the foundation for the next great Mariners team.

I've had that annual sitting in my little bookshelf. We didn't write another one.

When he was an Angel, Chone Figgins was annoying. In that way he kind of represented the whole team. When the Mariners signed Figgins, we told one another that at least now he would be our annoyance. It was strange to see a player we disliked so much become a player we were supposed to like so much, but as it is with pests in the NHL, they're so much better when they're on your side. Figgins and Ichiro, back-to-back in the Mariners' lineup? The Mariners were going to be good and so annoying. It was going to be glorious.

A lot of people liked the Figgins signing at the time. Like with the Freddy Garcia trade with the White Sox, I'm still willing to defend the idea. Figgins looked like he was pretty good. He fit a team need. Who knew? We were too certain, though, that Figgins had a relatively high performance floor. We kept repeating that it looked like he would age well. Athletic, disciplined sort, and all that. We ignored that he was powerless and something like five-foot-six. When Figgins turned bad, it was hard to remember how he ever wasn't, before. How the hell was that guy ever a seven-win ballplayer? He was, but the Mariners never had that Figgins. They had Mariner Figgins. Mariner Figgins demonstrated that the range of possible outcomes is impossibly broad, for any player you can imagine. Chone Figgins seemed safe. Chone Figgins became one of the very worst players in baseball.

This was obviously long overdue, as Figgins no longer served a purpose on the Mariners' roster. The team's eating money, but the team was going to eat that money regardless. There weren't compelling baseball reasons to hang onto Figgins, and Figgins certainly didn't feel like coming back and spending another several months not playing, hanging out at the end of the dugout. It was time for a divorce, and though Tuesday night's roster deadline provided a reason, there was already reason enough. Chone Figgins is old and bad, and on these Mariners, you have to be at least young and bad. Preferably not bad.

What went wrong? I don't know. Everything. Maybe Figgins really was hurt by not leading off. Maybe Figgins shouldn't have been moved to second base for some reason right off the bat. Maybe Figgins just got worse independent of the Mariners' decisions. You do have to give Figgins some credit for not becoming a distraction over the last couple of years. I mean, he was a distraction for us, but he didn't seem to be a negative clubhouse influence. He kept his shit to himself. And as much as we might laugh at the team that gives Chone Figgins his next chance -- and someone will do it -- remember that Jeff Cirillo rebounded after leaving. Remember that Scott Spiezio rebounded after leaving. Figgins could still be something for someone, and he'll get an opportunity. Remember, the range of possible outcomes is impossibly broad, for any player you can imagine. Chone Figgins taught us that.

This move now is almost purely symbolic. The Mariners aren't meaningfully better without Chone Figgins on the 40-man roster. His spot on the active roster will be taken by someone worth zero or one or maybe two WAR. Or less than that. But this is the right thing. Symbolic moves aren't valueless, and it was only after Figgins was officially gone that people would be able to start to move on from the whole episode. Even when Figgins was strapped to the bench and surrounded by electrified barbed wire, he was still there, hateable. With the symbol removed, people won't just hate four percent of the Mariners' roster. We'll still find players to hate, but they'll be different players. It will be new negativity.

The Mariners have ten days to trade, release, or outright Figgins. This is a fact and it is also something you should ignore. Chone Figgins is gone. He's not a bad dude, but when fans start to hate you as a player and as a person, it's probably time to go. Shit got ugly. Things could never be repaired as long as Figgins wasn't going to play.

Tonight the Mariners also made several other roster moves, and they had to DFA Figgins and another guy to add five guys to the 40-man roster so as to protect them from the Rule 5 draft. Scott Cousins was the other player designated for assignment, and his time with the Mariners lasted two weeks. He never played in a game, obviously. As far as I know he never personally met any of his roster mates. I doubt he had a uniform. I doubt he has a hat. I wonder if Scott Cousins has any physical proof that he belonged to the Mariners organization for a fortnight. There are always articles on the Internet, but you can fake anything on the Internet. "You were never a Mariner!" Scott Cousins' friends will exclaim. "Yuh huh!" Scott Cousins will respond. "Prove it!" his friends will demand. "I can't :( " Scott Cousins will concede.

Cousins joined the Blue Jays in the middle of October, then got dropped. Cousins joined the Mariners at the beginning of November, then got dropped. I wonder if he did any apartment hunting. If you're the general manager, you have to caution Cousins that his stay could be a short one, right? You'd sound like a real dick, but if you didn't do that, and then you dropped him, you'd come off like a real dick. I feel bad for Cousins if he's now locked into a couple of long-term leases on opposite sides of the continent. That's what he gets though for the whole Buster Posey thing. Karma manifests in the form of unwanted long-term apartment leases.

Those players added to the 40-man roster:

Maurer you probably already know -- he's a pretty good starting-pitching prospect. Catricala is 24 and he was good a year ago, so he'll get some opportunity to try to be that again. Morban is a 20-year-old outfielder who just hit .313 with High Desert, which is something you literally could do. But he hit 17 home runs, which you could not do. You could hit .313 by bunting all the time because I assume in the Cal League all the defenders play on the warning track. LaFromboise is 26 but left-handed and last year he was an all-right reliever. Fernandez is 22 and left-handed and last year he was an all-right starter. His repertoire is limited, as they usually are, and his ceiling is low, but the Mariners identified these lefties as guys teams could conceivably draft and stash in their bullpens. I think that's basically what the Rule 5 draft is for at this point, trying to find a second or third lefty for your bullpen. Maurer's name is the name most worth knowing, from a Mariners baseball perspective. The 40-man roster still has Yoervis Medina on it.

The 40-man roster stands at 40 players, so more room will have to be made in the event that the Mariners sign a free agent. That room cannot be made by designating Chone Figgins for assignment. This is because Chone Figgins has already been designated for assignment, as of tonight. It's the end. I'm going to go sit down somewhere else, away from a screen, and try to feel this as deeply as I am able to.