Share All sharing options for: Mariners Trade For Robert Andino

It's not a surprise that the Mariners moved Robinson. Robinson was out of options, the Mariners have to make some 40-man roster decisions by a Tuesday night deadline, and Robinson probably isn't good enough to stick in the major leagues and serve as anything of value. Robinson last year did a good job of cutting down on his strikeouts. He still struck out a lot, he didn't walk enough, he didn't hit for power, and he's not a particularly remarkable defender. Some guys get profiled as fourth or fifth outfielders. Right now, Robinson is probably more of a sixth or seventh outfielder.

It's not a surprise that the Mariners added a middle infielder. There was some thought that Robinson would be moved for someone who wouldn't have to be placed on the 40-man roster yet. Some low-level prospect or two. Instead, Robert Andino will take a spot on the roster, but the Mariners would've needed a middle infielder on the roster anyway eventually. The Mariners needed to find somebody to play behind Brendan Ryan, somebody with actual baseball talent, and Carlos Triunfel isn't that guy. Nick Franklin isn't that guy, at least not yet. Andino will occupy at least the Munenori Kawasaki role, and maybe a lot of the Chone Figgins role, too. He is a versatile and not old baseball player.

Andino is 28 and right-handed. In his major-league career, he's posted a 67 wRC+. In his major-league career, Trayvon Robinson has posted a 70 wRC+. The Mariners effectively turned a backup outfielder into a backup infielder, because they didn't need the former and they had more of a need for the latter. Andino's approaching 2,000 career innings at second base, he's got nearly 1,000 innings at short, and he's got some hundreds of innings at third. He's also gotten very limited exposure to the outfield. We knew the Mariners would get a guy like this, and now we know who that guy is.

Andino first came up with the Marlins all the way back in 2005, and he got dealt to Baltimore in 2009 in a swap of two players out of options. This is a relatively unremarkable example of history repeating. Because Andino isn't a good hitter, it follows that he doesn't walk a ton, and he doesn't hit for power much. But he does walk a little, and he hits the ball most of the time that he swings. Andino's batting approach isn't the problem. Andino's batting talent is the problem, but he's a reserve and he's a reserve behind Brendan Ryan so expectations will be lowwwwwww 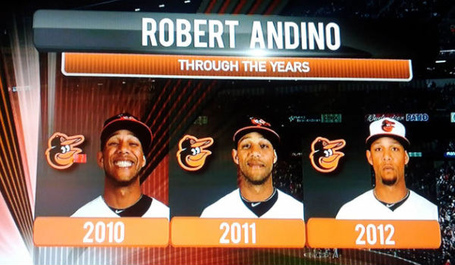 Red Sox fans can't stand Andino, because down the stretch in 2011 he killed them. He delivered a few clutch hits, and he capped the entire season with the line drive that died in front of Carl Crawford and ended Game 162. Robert Andino played a crucial role in one of my favorite overall baseball experiences of what I'll call the MLB.tv Era, and he'll always have that, for the rest of his life. I rooted for the Red Sox in 2004, and I came to regret it. They won again in 2007. It was awful, what that did. I wanted desperately for all of that Red Sox success to be taken back. I wanted desperately for everything to be undone, having learned my lesson. I don't know if it's possible for that to be undone, but Game 162 could've been a step toward that goal. Robert Andino has helped to try to undo the Boston Red Sox.

94 miles per hour. Usually when players get hit in the brain stem by a 94 mile-per-hour fastball, they do something other than approach the source and stretch their jaws. Robert Andino cannot be felled. Not even by a fastball to the brain. Not even by Justin Smoak's fists. The Mariners just boosted their toughness, if your definition of toughness is the ability to withstand a blow to the skull. And what other kind of toughness is there, really?

Robert Andino. You might not like him a lot. But you should at least give him a chance, because Munenori Kawasaki slugged .202.