How To Suck The Fun Out Of The Mariners' Offseason

Share All sharing options for: How To Suck The Fun Out Of The Mariners' Offseason

We've seen the rumors linking the Mariners to free-agent outfielder Josh Hamilton, and Hamilton's something of a widely-known superstar. We've also seen the rumors linking the Mariners to free-agent outfielder Nick Swisher, and the offseason's just getting started. Justin Upton is in play, and you never know when the Mariners might dive in. The Mariners could go for Billy Butler or Alex Gordon or Wil Myers. The organization is talking a big game about raising payroll, and this time they seem serious about spending. It looks like this has the chance to be an exciting offseason -- but it doesn't have to be. In fact, you can all but remove all the fun with one simple step.

Ditch the names. Don't worry about players' names, and just focus on the numbers. He isn't Josh Hamilton, slugging superstar and potential franchise icon. He isn't Josh Hamilton, recovering drug addict with a seemingly unsustainable approach at the plate. He's 31-year-old Free Agent Outfielder X, who projects for roughly 4 WAR next season, and fewer WAR in the seasons beyond. There are odds that he could exceed that projection, and there are odds that he could fall short of that projection, because it's all about bell curves.

He isn't Nick Swisher, versatile and consistent switch-hitter with a personality that could power a metropolis. He's nearly-32-year-old Free Agent Outfielder Y, who projects for roughly 3.5 - 4 WAR next season, and fewer WAR in the seasons beyond. There are odds that he could exceed that projection, and there are odds that he could fall short of that projection, because bell curves again.

Let's say the Mariners have, I don't know, $25 million to spend this offseason. In the free-agent market, you'd expect that to purchase something like five wins or so. There are any number of ways those five wins might be acquired. Maybe the Mariners go for one of the 4-WAR outfielders, and then pick up a 1-2 WAR pitcher. Maybe the Mariners go for a 2-3-WAR outfielder and a 2-WAR pitcher, and then they look to add 1 WAR to the bench. The Mariners will probably want a catcher, and he'll probably be worth 0-1 WAR. The Mariners might want a backup infielder, and he'll probably be worth 0-1 WAR.

Trades can be a way to add wins without spending a corresponding amount in immediate salary. Trades still subtract from organizations; instead of losing value in salary, you might lose value in prospects. Every prospect has a value. By trade, the Mariners could target anything. They could target 26-year-old Designated Hitter, who projects for roughly 2-3 WAR. They could target Big-League Ready Top Prospect Outfielder, who projects for roughly 2-3 WAR. Many players have fairly similar short-term WAR projections. They just arrive at their similar results in different ways.

So much of what's exciting has to do with the names. If the Mariners got Hamilton, you'd think about his MVP season with the Rangers. If the Mariners got Myers, you'd think about his Hall-of-Fame offensive potential. By knowing the identities of the players, you can have more information, but ultimately everyone's just a WAR projection and a corresponding salary value. You can talk about the various details of Josh Hamilton's past and present all you want; it's not going to change the math. Hamilton projects to be worth $Z, +/- appropriate error bars. He could be very good, very bad, or somewhere in between.

The offseason is in part about mystery, about not knowing what the roster might look like at the other end of it. We can estimate that the Mariners are in position to add about five wins by free agency, and maybe more via trade if they're willing to surrender future value in the form of prospects. There are few realistic possible sequences of events that would leave the Mariners looking like pre-season division favorites. Odds are they'll still be looking up at some of the competition. Then the season will play out and the teams will either meet their projections, fall short of them, or exceed them. Imagine a graph with five different bell curves, one for each team in the AL West, and the X-axis is full-season win total. Every team will have some shot at finishing first, and every team will have some chance of finishing last. Sometimes there are the 2012 Orioles. Sometimes there are all the other recent Orioles.

Can't stand being excited? Can't risk being excited? You can either tune out completely, or you can replace all the player names with player numbers. It turns out everything in baseball is nothing but basic probability. The sooner you take that to heart, the sooner you can cease being excited by that which other people find highly exciting. Godspeed! 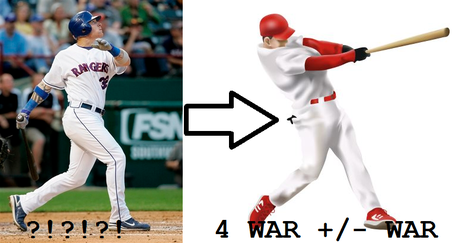