Jack Zduriencik Has Churned Through Hitters

The Mariners of the past four seasons haven't been good at hitting, but they haven't just accepted it.

Share All sharing options for: Jack Zduriencik Has Churned Through Hitters

I got curious about how much the Mariners turned over their roster. There are many ways of answering such a question. The easiest would be counting up the players who left/arrived, and that's a legitimate method, but unsatisfactory to me. That wouldn't count Michael Saunders as a new player, but he got vastly more playing time in 2012 than in 2011. I wanted a way to capture that change, that reallocation of available playing time, not just the names on jerseys that moved.

Take a hypothetical and impossible team that had only four hitters* A through D who each batted 100 times. Batter A was terrible and is replaced the next season entirely by new rookie Batter E, who bats 75 times that next year. Batter B was fine and gets another 100 plate appearances. Batter C enters a platoon with new Batter F, each getting 50 trips. Batter D did well and sees his playing time increase to 125 appearances.

* that's more than the Mariners had! [rimshot sound effect]

I decided to calculate the roster turnover between X and X+1 by first assuming that playing time would be held stable and then, examining the playing shares in X+1, tally up only the increases over X. Using the above example:

This can be double checked by reversing the orders of the years and running the same process. Batter A is an increase of 100, B is still 0, C goes up 50 (making the net 150), D, E and F all played less so no increase is recorded and we end up with the same 150 result.

In reality, I didn't use raw totals, but rather percentages of the team's overall PA total. This was to account for anomalies like strike-shortened seasons and the general meandering of total offensive attempts. The goal was to capture how the playing time distribution changed and the best way to do that is on a percentage basis. 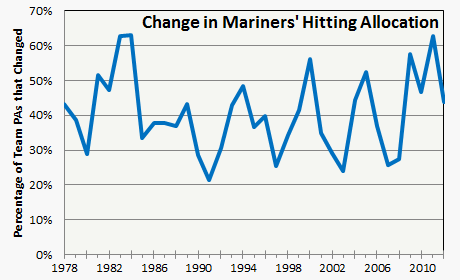 That's a pretty jerky graph, but there's no particular reason for it to be gradual or gently sloped really. Honestly, I could have just left out connecting the dots, but I didn't and now I'm not going back and changing it. The 1991 season saw the least amount of change with just 21% of the PAs moving around. The 1990 Mariners were not good at hitting at all. "Maybe try most of them again?" The Mariners' coaches might have thought to themselves. Good thing they did because the Mariners went from a 98 OPS+ in 1990 to a 97 OPS+ in 1991. Oh, wait.

On the other end is the 1984 season which saw 63% of the hitting allocation change. Remarkably that season came after the third-highest turnover season of 1983, which was just three-tenths of a percentage behind it. Those early teams were not good ball smackers. Sandwiched between those two was the 2011 season. Coming after the catatonic 2010 offensive performance, it's little surprise that 2011 ranks so high.

In fact, looking at the past four seasons (2009-12, marking Jack Zduriencik's tenure as GM), they all rate as high turnover years, each above 40%. The last time the Mariners underwent such continuous grind was early in franchise history in the early 1980s. Now I'll close with this gigantic chart of the 2011-2 turnover.