Hector Noesi Officially Did It

Share All sharing options for: Hector Noesi Officially Did It

Two posts in two days about Hector Noesi. All right. And people ask me what I write about all offseason when the Mariners aren't playing. It's like, what kind of question is that, use your head.

This is something I suspected would be true all season long, but that I didn't want to write about until it was official. Now it's official, because the regular season is long over, and the playoffs don't count because they're a whole different beast. If the regular season is a horse with the head of an elephant, the playoffs are an elephant with the head of a horse. Similar beasts, yet completely different beasts! Moving on. Whoa, look at that, another paragraph!

We wrote about this briefly at the time, but Nix's opposite-field liner came off the bat at 89.8 miles per hour, according to the ESPN Home Run Tracker. Some people like to focus on home-run distance, and home-run distance is a worthwhile measure, but I care more about quality of contact and that's more directly related to speed off bat than distance covered. What is a hitter trying to do, if not hit the ball really hard? What better measure of how hard a ball is hit than its speed off of the bat?

For a home run, 89.8 miles per hour is low. The league-average homer this year left the bat at about 103.5 miles per hour. I checked on this probably once a week, and now we can say it for sure: Hector Noesi allowed the weakest-hit home run of the 2012 season. Jayson Nix's homer off Noesi at Yankee Stadium barely beat out a Chris Iannetta homer off Phil Hughes at Yankee Stadium a month earlier. Noesi allowed plenty of quality contact on the way to posting a near-6 ERA, and out of all of that quality contact, Nix's homer was the lowest-quality contact. The best of the worst, if you prefer.

You can watch video of the home run right here. Or you can survive on screengrabs and a .gif! It wasn't even that bad of a 1-and-1 fastball that Noesi threw: 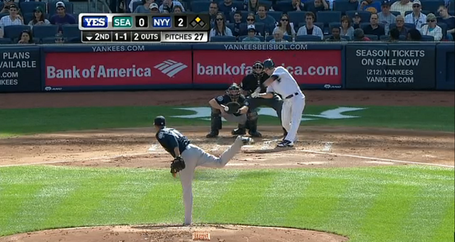 Area fans were terrified of getting their hands on literally the weakest-hit home run of the entire 2012 regular season: 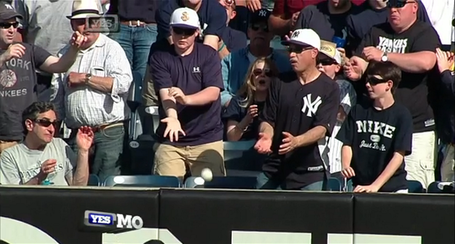 Like if ever there's a home run you should try to catch with your bare hands, it was this home run. Home runs don't get hit any weaker. Nobody made much of an effort and the dude sitting in the front row at stage right looks like he's making a noise like Professor Frink. 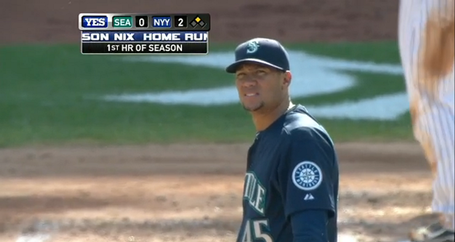 Sometimes it made perfect sense why Hector Noesi got hit around. In this particular instance, it made a lot less sense. Here's a .gif of the pitch, with the contact removed:

That's a 92 mile-per-hour fastball on the outer edge of the zone. Trying something, I went into the PITCHf/x data and identified 223 similar pitches from the 2012 season -- that is, 1-and-1 fastballs thrown between 91-93 miles per hour from righty pitchers to righty hitters, in similar spots. Noesi's was the only one of those pitches to get hit out of the yard. Of those pitches, 173 were strikes, and of those strikes, an astonishing 95 were called strikes. Very often, this sort of fastball was taken for a strike. Nix punched it out the other way, with the fly ball gaining about 12 feet thanks to environmental conditions. With the wind stripped away, according to the Home Run Tracker, Nix's fly ball would have left zero ballparks. On this particular afternoon, it left one ballpark, much to Hector Noesi's consternation.