The Carelessness Of Bluster

Share All sharing options for: The Carelessness Of Bluster

I've never really minded that the Seattle Mariners and San Diego Padres have been designated interleague rivals. Granted, because I lived in San Diego so long, it was kind of convenient for me and so I'm a little biased, but I've never had an objective problem with it. Sure, it's silly to make up a rivalry out of nothing, but most emotions associated with professional and amateur sports are silly, and the Mariners and Padres have been very similar organizations. The Mariners and Padres play in cities with a lot of people from the other city. The Padres have made sense as a repeat opponent, and despite the jokes, playing them does feel a little different from playing, say, the Rockies, or the Diamondbacks. There's something about them, those Padres.

The Mariners lost that game 3-2. In the bottom of the ninth, they couldn't do a thing against Dan Miceli, so they lost in the first game in their beautiful new stadium because of a blown save because their closer walked four dudes. The Mariners got their first Safeco win two days later, and the agony of remembering Jose Mesa has gotten weaker over time, but for as long as the Mariners are playing in Safeco I'm going to remember watching Jose Mesa melt down against the Padres in the debut. That's something that's always going to bother me about the Padres, the way they spoiled that experience. To be honest it was pretty much all Mesa who spoiled the experience, and having Mesa on the Mariners was the Mariners' decision, but generally those who hate themselves take it out on others, and the Padres are inextricably associated with that most unpleasant memory. They were there while I was having a bad time.

So, sure, the Padres as rivals. National League rivals, anyway. Adds an element to all those spring-training games in Peoria. I like the way the organization has embraced it, even if it's mostly done tongue-in-cheek. Now, that was a lot more background words than I intended to type, but this afternoon I found myself on Mariners.com, desperate to find something to write about. Greg Johns did a mailbag, presumably because he was also desperate to find something to write about, and I couldn't write about somebody else's mailbag. So I clicked on a video. That led me to other videos, and that eventually led me back to all the 2012 Mariners team commercials.

I was going to do one thing with them, then I watched the Dustin Ackley commercial and had to watch it a few more times over. Which felt strange since during the season I must've seen this commercial on TV a hundred or two hundred times, but it doesn't take long to start tuning a commercial out. It felt somewhat fresh seeing it for the first time in weeks, and while the commercial is odd and far from my favorite of the crop, something toward the end grabbed my attention. We see Dustin Ackley hitting what's presumably a home run, and the catcher stands up behind him. There's something there on the catcher's sleeve. 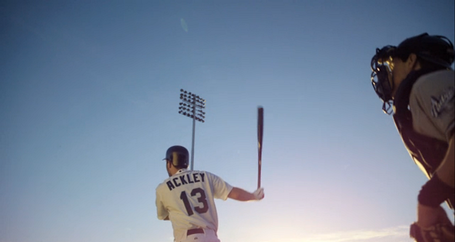 It's a patch, and it's the lone identifier. We don't see what's on the front of the jersey, and we don't see what's on the back. Usually in videos like this I assume the opponent is wearing some generic baseball uniform because that detail isn't what's important and you don't want to hurt anyone's feelings. But, squinting, this patch looked familiar, and indeed, it is familiar: 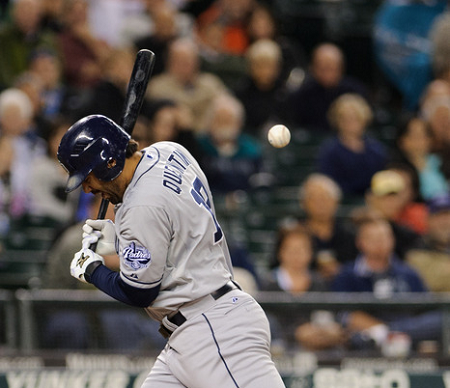 That's the Padres' new patch on the catcher's sleeve, meaning the catcher is wearing a Padres jersey, meaning Dustin Ackley hit a home run against the Padres. The catcher is barely in the video and his team identity is an irrelevant detail, but the Mariners ever so craftily slipped in a way to poke fun at their rivals. "Look at you allowing us to hit dingers. You are inferior to us because you allow us to hit dingers." 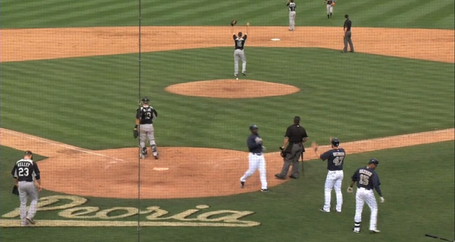 The Mariners didn't wear home whites this spring. The Padres didn't wear road grays this spring. They both wore blue, and while that made it a little confusing when they were playing against each other, actual sports aren't like video-game sports. I'll play a friend of mine in video-game hockey, and every now and then at the last second he'll change his team's jersey to be the same color as my team's jersey, just to maximize the confusion and chaos. It's not like that in baseball and it's not like that in real life. In Arizona, the Mariners and Padres wore blue, making the commercial out to be inaccurate.

The Mariners might've thought they were being clever, but sometimes focusing on the little details causes one to overlook the big ones. Better luck next time, Seattle Mariners TV commercial production crew. Next time let's try to be better than the baseball team we're promoting.