Share All sharing options for: Luis Jimenez Has Life Changed

So actually it was the opposite of cruel, but anyway, the Mariners outrighted Jimenez today, and he'll get to choose whether to return to Tacoma or become a minor-league free agent. Jimenez is 30 years old and last year he posted a .907 OPS with Tacoma over a whole bunch of games. He's clearly good enough to get by at one high level; he's probably not good enough to get by at the highest level, but he'll keep on trying, because he's figuratively hungry and maybe literally hungry and he's not yet prepared to fall back on his alternate career as a professional scientist. 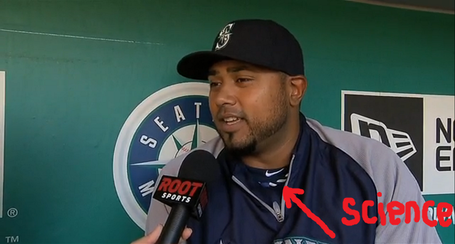 Jimenez batted 18 times as a Mariner in his late-season cup of coffee, and it was his first-ever cup of coffee, provided that by "cup of coffee" one means "experience in major-league baseball" and not "a cup of coffee, the beverage." Reports would surface on Twitter of opposing players sitting down to watch Jimenez take batting practice, because apparently he would put on some prodigious shows. The whole time I was secretly hoping that Jimenez would hit a dinger in a game. I kept it secret because it's important to have predictable, ordinary, uninteresting secrets. That way, if somebody asks you to tell them a secret, you can tell them something uninteresting without lying, and then that other person will never bother prying again. "Nothing to find here," that other person would think.

Person: Tell me a secret.
You: I hope Luis Jimenez hits a home run in a baseball game.
Person: ugh you're uninteresting
Person: I will leave you alone from now on

Person: Tell me a secret.
You: I have dark fantasies of killing a man.
Person: You are very interesting, tell me another secret.
You: Oh no, what have I done!

Jimenez never did hit a home run in a game. By distance, this is the closest that he came:

That might be the closest that he ever comes, because let's be honest here: a guy like Jimenez doesn't get a lot of shots. There's a reason he had to wait this long for his first one. I wouldn't be shocked if Jimenez got another opportunity, but I would be surprised, and that opportunity would presumably be limited. He presumably wouldn't get many chances to hit a home run.

But while Jimenez remains dingerless, he is no longer hitless. In his first-ever start, on September 7, he walked in the bottom of the second, and he singled in the bottom of the fourth. He singled on a grounder up the middle against A.J. Griffin, who is a pitcher some people have heard of. Jimenez finished 1-for-17, but that's a whole hell of a lot better than 0-for-17, and as with Mickey Lopez, Jimenez's one hit can never be taken away from him. It was untouched so it's not like it'll ever be reversed to an error. For the rest of his life, Luis Jimenez will know that he recorded a legitimate hit in major-league baseball, and that's the kind of thing you smile about as you lean back in a patio chair. Jimenez has the baseball, probably. He has the bat, probably, and he has the jersey, probably. Jimenez took more than some good money away from his limited time in the bigs.