An Anticlimactic Moment, With The Seattle Mariners

In honor of the anticlimax, without which the climax would be just another thing.

Share All sharing options for: An Anticlimactic Moment, With The Seattle Mariners

It was July 13, meaning it was the day before July 14, the day of this past summer's USS Mariner/LL event at Safeco Field. Those of you who were there will remember that we spoke pretty negatively about the state of things at the time. We spoke negatively to you guys on Saturday afternoon. We spoke negatively amongst ourselves on Friday night.

That night, Matthew and I met up with Dave, Salk, and Divish at a bar somewhere by a lake. I want to say it was Green Lake, and while I might be wrong about that, you might as well trust me and besides, the location of the bar is insignificant. We were sitting in any bar in Seattle, and the Mariners game was on the TV, and we were paying only half-attention to it, because it was a Mariners game on TV. The Mariners were just coming out of the All-Star break at 36-51. Their opponents -- the Rangers -- were not.

In conversation, we were being critical of the Mariners in the big picture, and what attention we paid to the TV gave us reason to be critical of the Mariners in the small picture. From the first inning all the way through the eighth inning, the Mariners couldn't score a run, and their best opportunity was wasted by Justin Smoak. Meanwhile, Kevin Millwood made just enough mistakes to make it feel like the game was over before the seventh. The Rangers didn't light the Mariners up, but they held a 3-0 lead going into the bottom of the ninth, and with Joe Nathan, Safeco Field, and the Mariners, that looked like as secure a lead as any.

As a group, we started to pay a little more attention, if only because the game was almost over. Jesus Montero led off the ninth and made an easy out. I have no recollection of Jesus Montero once wearing this facial hair: 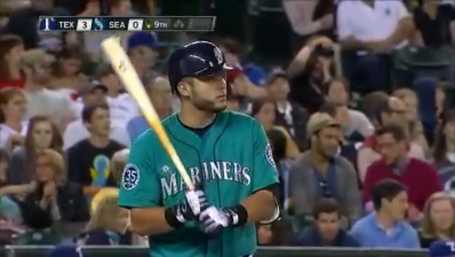 It didn't suit him. Montero lasted four pitches, and then Kyle Seager lasted seven pitches, the last of which he grounded for a single. After Seager, Smoak drilled the first pitch he saw for a base hit. That quickly, the Mariners had the tying run at the plate, and the guy at the plate was the reliable John Jaso. There was a long way to go yet, but there was less distance to cover than there had been moments before.

Jaso singled and the bases were loaded. That brought the winning run to the plate in the person of Michael Saunders, who, again, was one of the actual respectable bats this season. We knew as much in the middle of July. Saunders swung and missed, took a ball, and then pulled a grounder to first. It looked like an out, but Michael Young couldn't handle it and it seemed like the Mariners got a huge break. Our little side table in the bar came alive, until we noticed that Saunders had rounded first while the runners ahead of him had stayed put. Saunders was easily tagged out and the feeling was that the rally was dead. The tying run was in scoring position, but the next hitter was Carlos Peguero.

I can't tell you how many times I've nearly written about Carlos Peguero's one walk of the season. He had one, in 57 plate appearances. Luis Jimenez had one walk. Jason Vargas had one walk. Carlos Triunfel had one walk. Munenori Kawasaki had eight walks. One time, Peguero walked, and one time, Peguero looked like he had a legitimate plan and a legitimate eye. His one walk came in that plate appearance against Joe Nathan, who all season walked just 12 batters unintentionally. Peguero walked in a full count. He laid off three breaking balls in the dirt. One of them had earlier gotten away from the catcher and allowed a run to score while allowing the other runner to move to third. Peguero's walk put runners on the corners, with two out, the score 3-2, and Dustin Ackley coming up.

It's not that Saunders' baserunning out had been forgotten, but the rally didn't feel dead anymore. As much as Ackley has statistically struggled, we still feel and felt some confidence in his skillset, and when an inning like this gets going you really start to believe in the power of momentum. You figure that a pitcher who's almost blown it is going to blow it. You figure that an offense that has almost come back is going to come back. Some of those in attendance rose to their feet as Ackley came up, and considering the circumstances, that's not nothing. 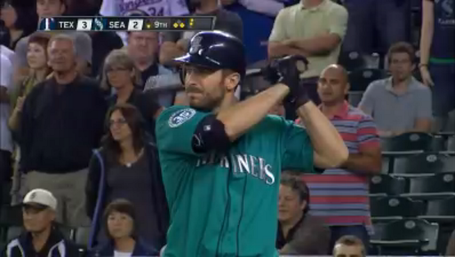 For an idea of how this felt, we consult the half-inning's Leverage Index. If you don't know, Leverage Index basically measures the significance of each event in a game, based on win expectancy. The average is 1, where an LI below 1 is a less-stressful situation, and an LI above 1 is a more-stressful situation. The more you're sweating, the higher the leverage, probably. The log:

Out of all of Dustin Ackley's plate appearances on the season, this one had the second-highest Leverage Index, behind June 13th's 6.93. The stakes weren't high, in the big picture, because the Mariners were 15 games below .500. But within this one particular game in isolation, the stakes couldn't have been much higher. Ackley had himself a chance to tie it with a single or win it with a double. The Mariners had a chance to pull a win or at least a little extra life out of a game that had long since been declared dead.

At this point I will introduce you to World's Most Expressive Usher. I didn't notice her at first, and then I couldn't stop noticing her. Take it away, lady.

Nathan: fakesies!
Usher: why literally would you do that
Nathan: I...I don't really know

The usher had reason to be exasperated here because honestly in that situation what the fuck kind of first-pitch strike call is that? We've all learned about the lefty strike zone, that's outside off the plate, but this was so far outside off the plate the best explanation I can come up with is that the umpire suffers from some sort of incapacitating neurological disorder. Ackley was behind in the count, but not finished.

Well would you look at that, another shit strike to put Ackley behind 0-and-2. He wasn't finished, but the usher understood his disadvantage. This year, AL batters hit .255. After falling behind 0-and-2, they hit .171. The Mariners had gotten this far, and they were still only a hit away from completing an out-of-nowhere comeback against one of baseball's best teams, but the chances of such a hit had been reduced by umpire negligence. You can see Ackley jerk his head away after hearing the strike call above, restrained but pissed off.

Nathan's third pitch was a breaking ball, low and taken. The count moved to 1-and-2, and things felt a little less dire. The fact of the matter is that 1-and-2 isn't a whole hell of a lot better than 0-and-2, but earlier, Jaso had singled on a 1-and-2 pitch. None of us at our little bar table said a word. Some of us watched the TV, and some of us watched a reflection of the TV on a mirror on the wall. Watching baseball in reverse is even more confusing than you'd think it would be but by the bottom of the ninth we'd gotten the hang of it.

One line drive was all it would take. Or one wild pitch, or one grounder through the hole, or one soft grounder too soft for a play to be made. Ackley was drafted for his swing. He just needed to put on one of those swings.

With the baseball game over, we all shook our heads and began figuring out how to divide up the check. Fuckin Mariners.