Share All sharing options for: Let's Talk About The New Safeco Field Fences

Surely you've heard by now that the Seattle Mariners are officially bringing in the fences at Safeco Field. I don't know why they didn't wait to announce this until after the end of the regular season, but then I don't know why they'd wait until after the end of the regular season if they've already got everything lined up, and this announcement is sparing you a blog post on, man, I don't even know. Hisashi Iwakuma? I didn't have an idea for something to write about today, and now something has been given to me. Something important!

This is the image that's been making the rounds, and it tells you just about everything you need to know about what's going on: 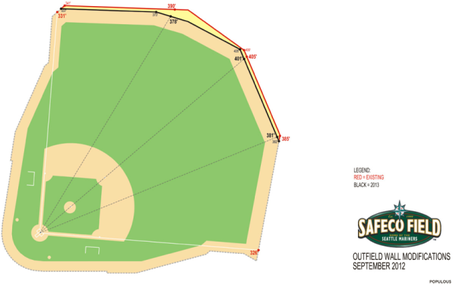 The foul lines are staying the same, and right field is staying the same. Elsewhere, the fences are being moved in a minimum of four feet and a maximum of 17 feet, and also the hand-operated scoreboard in left field will be relocated and thus will no longer be in play. So the fence height in left field will be dropped from 16 feet to eight feet, making it eight feet high all the way around. The big staggering difference is in the left-center power alley, which will no longer point at right-handed batters and make threats at them. Now it's going to be a little more kind, if still somewhat standoffish.

This plan has already been approved -- it isn't just a proposal. It's going to happen, and it's going to happen in time for the 2013 season. Which means, for a while in the 2013 season, we won't really know how to adjust the Mariners players' statistics. We'll find out new information about the new Safeco Field, and that's going to be exciting, at first. Then we'll get used to it and then we'll basically stop talking about it.

It's been no secret that Safeco Field has been extremely pitcher-friendly from the start. The original batter's eye in center field didn't help, and that was taken care of, but if memory serves only Petco Park has been more extremely pitcher-friendly over the last while. It's fine for variety to exist in the way that different ballparks play, even though when you think about that it's weird, but there was always the argument that Safeco was too extreme. The Mariners at last agree with the sentiment, after years and years of having the same conversation and settling on inactivity.

The Padres, incidentally, are also talking about moving in the fences. There seems to be a trend toward batter-pitcher neutrality, and that seems like a good thing, even if there's still variation in league-wide park factors. The game shouldn't be completely different in a few ballparks from how it is in the other ballparks. Colorado excepted because I guess we can't just take a team away from them at this point. They could try digging a lot and relocating Denver into a mile-deep hole.

At the USSM/LL get-together at Safeco over the summer, I got a strong vibe from the Mariners' front-office representatives that changes were coming. Maybe at that point they already knew what changes were going to be made. They talked about the power alley and the hand-operated scoreboard, and sure enough those are the big alterations. This decision was hardly made lightly and the Mariners consulted with everyone. One figures they talked to a lot of players, and one figures players had a lot of opinions. Or, two opinions, depending on whether they were hitters or pitchers.

I've been in favor of adjustments for some time, because I like the idea of a more neutral ballpark, and I like the idea of removing the dimensions as an excuse or frustrated talking point. People have been complaining about the deep fences for years and while the deep fences presumably haven't been the problem, as much as talent has been the problem, now people will have to talk about something else, unless the adjusted fences are still too deep. Hitters will have to think about something else. When they fly out to the track, they'll be less likely to blame the ballpark, and more likely to blame themselves. That seems healthy. Crippling self-doubt, I mean.

It's obviously way too soon to say how the park's going to play going forward, but it's going to be friendlier, if you're patient with it. Note that you might not really see significant changes in 2013. After last season, the Mets made adjustments to Citi Field in order to make it less pitcher-friendly. In 2011, run scoring was down nine percent in Citi Field, compared to on the road. In 2012, run scoring has been down 13 percent in Citi Field, compared to on the road. The average road Mets game has lost 0.4 runs, but the average home Mets game has lost 0.8 runs. This is instructive, because it shows how one season, even a full season, can still be too small of a sample size. Citi Field should be friendlier than it used to be. That just isn't yet showing up in the numbers.

As an immediate example of how Safeco could be different, here's a screenshot of Albert Pujols' first-inning double off Felix Hernandez last night: 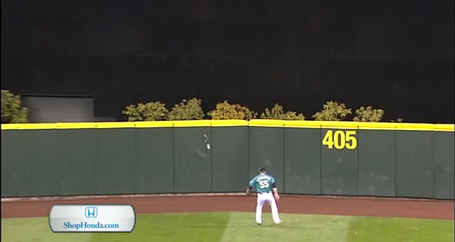 Monday night, that was a double off the wall. In 2013, a batted ball with the same trajectory might go for a homer. We don't know if Pujols would've hit the same batted ball with different ballpark dimensions, because everything is interconnected, but basically balls will fly out that wouldn't have flown out before. There will be more home runs, even if it takes some time for that to show up in the statistics.

Of course, any ballpark adjustment is neutral, in that it has the same effect on visitor batted balls as it does on host batted balls. The Mariners and visiting teams have both long struggled to score in Safeco, and these adjustments aren't going to make the Mariners better on the field. But they could make the Mariners better in other, less-direct ways. We don't know what psychological effect Safeco was having on both hitters and pitchers, but there were definitely whispers, and it doesn't help a team to have its hitters hate the place they play. Additionally, this should help in roster construction, as the Mariners don't have to focus so much on lefty bats, and as righty bats might be more open to the idea of playing in Seattle. It's going to take available righties some time to understand that Safeco has changed, so nothing will be immediate, but to whatever extent hitters have been avoiding Safeco Field, that should be reduced. Safeco's becoming more inviting for bats, and it won't be uninviting for arms. It could still be a place for pitchers to post lower ERAs.

We're going to have to adjust to these adjustments, and it's going to take time. It's certainly going to take a lot of baseball games. Safeco, for better or worse, has been a big part of the Mariners' identity, and now Safeco is changing in a way it's never changed before in well over a decade. There are only two things we can presently declare for certain: the Mariners are finally bringing in the Safeco Field fences, and Jason Vargas just started looking for a therapist.