Angels Accomplish Nothing With Meaningless Victory

Share All sharing options for: Angels Accomplish Nothing With Meaningless Victory

Okay, so maybe the Angels guaranteed that Felix Hernandez won't win his second career AL Cy Young Award. Felix ends the year at 13-9 with an ERA over 3, where a month ago it was under two and a half. Felix still had a terrific season, with an unbelievable run in it, and he'd already lost most of his Cy Young momentum anyway. Lately Felix hadn't really been in the Cy Young conversation so I don't know how much damage the Angels actually did to his chances. I can say this, though: the Detroit Tigers are going to the playoffs, and the Los Angeles Angels are not, meaning Miguel Cabrera is probably going to win the AL MVP over Mike Trout. Trout, who tonight finished 4-for-5 with three runs batted in. For the Angels, this was a hollow victory. Yes, great, they beat Felix and the Mariners. They found out they weren't going to the playoffs during the eighth inning, and all of a sudden, hey look, Angels, you're just like us. Do you want to hang out in October, maybe go apple-picking? Because the both of us are going to have time.

Tonight the Mariners managed to play spoiler by keeping the Angels occupied long enough to find out about the A's/Rangers result during gameplay. At least this way the Angels were disappointed before they got back to the clubhouse. That's the upside for us, that was the only thing to celebrate, because the Angels just played Felix and won 8-4. Not that it really matters how you go out, but this wasn't how anyone wanted Felix to go out in his final start of the year.

For an idea of just how dreadful this was, consult the win-expectancy chart. The player who made the biggest positive contribution on the Mariners was Miguel Olivo. The player who made the biggest negative contribution on the Mariners was Felix Hernandez. I think there's a lot of value in those chart posts, and this is one example. If one were to have missed this game, and if one were to then have checked out the chart post, one would see that Miguel Olivo was the big contributor while King Felix was the suckfest. One would then arrive at the sensible conclusion that this was not a game worth reading about at all. I don't know if there exists a better indicator. Maybe Chone Figgins instead of Miguel Olivo? Maybe Olivo's positive contribution being smaller? Nobody likes to read about Felix getting thrashed. Nobody wants to hear that Miguel Olivo was the Mariners' best player.

If I wanted to be a real geek, I could advance the argument that Felix's numbers tonight weren't that bad. He threw two-thirds of his pitches for strikes, and a quarter of the Angels' swings whiffed. Of the Angels' 19 balls in play, 13 were tallied as grounders. If somebody posted these ratios over a full season, he'd look like an ace. Felix was not actually ace-like tonight, and while some of the hits were soft some were also perfectly legitimate. The Angels made a lot of good contact. But it's interesting that, even in a bad start for Felix Hernandez, you can squint and see elements of a good start. Effective Felix and Ineffective Felix aren't that far away from one another.

It is, emotionally, sort of a bummer the way this played out, because it would've been nice to give Felix his ovation after a good performance instead of a bad one. It would've been nice for the season's final King's Court to have something to go crazy about, because it's the best fan section in baseball. But I don't think that many people actually care. Felix still got his ovation, and nobody thinks less of him because of tonight. The attendance was 13,963, which is barely more than the Mariners drew for their Monday series opener against the Orioles a couple weeks ago. Felix or no Felix, there wasn't a whole lot of fan interest in this game, so the game just doesn't matter that much. Yeah, it would've been nice if Felix were better. Yeah, it would've been nice if Felix didn't have so much trouble against the Angels this season. But 2012 Felix was great, and 2012 Felix vs. the Angels just gave us another reason to keep hating the Angels. The Angels are looking really good for next season, but they were looking really good for this season, too, and they're not even going to the playoffs. The Angels aren't going to the playoffs, and the Athletics and the Orioles are.

That's the real beacon of hope, here. For Angels fans, it's got to be just the most frustrating thing in the world that the Angels aren't moving on because the Orioles are magicians and the A's came out of nowhere. But for us, we're on the other side of things, and we see two teams going to the playoffs that we couldn't have imagined going to the playoffs six or five or four months ago. I think this year's Orioles will be good for a few years of Mariners optimism. How a team's roster looks in spring training matters, and how a team is projected to finish matters, but sometimes baseball is just batshit insane and it seems to pick its winners almost at random. You never know which Mariners team might catch baseball in a mood. We've seen Mariners teams in the past catch baseball in a very different and opposite mood.

I wouldn't say that tonight's game got out of hand quickly, because the Mariners were within three runs until the top of the sixth, but tonight's game definitely got rather unpleasant quickly, which isn't much better. The Angels pushed three across against Felix in the top of the first and already that meant Felix probably wasn't on his way to a gem. That the Angels continued to get their baserunners against Felix worsened things. It felt like a game that was going to become a blowout before it became a blowout. It didn't end as a blowout because the Mariners somewhat closed the gap, but this game was neither close nor in any way entertaining, save for the eventual knowledge that the Angels played the ninth inning for no reason. If I were Mike Scioscia I would've just pulled my players off the field as soon as Grant Balfour recorded the final out in Oakland. Because I mean it's like, why, let's just all go home.

Casper Wells hit a homer, and if it feels like it's been a while since Casper Wells hit a homer, it's because he hadn't homered since August 26 and I wasn't even watching that game so for me it feels like even longer than that. Nice of Wells to show up and do something a few days after Doug Fister set a new AL record for consecutive strikeouts because remember when the Mariners made that trade, remember how it worked out, it's still working out, and it's working out really poorly. Wells did also manage to throw Mike Trout out at second trying to stretch a single into a double, and while it's not like Wells threw out an MVP winner or anything, Trout's still pretty good.

Justin Smoak walked twice, doubled, and just got under what could've been a home run. Smoak has been mis-hitting pitches all season long but these days I'm apparently more likely to give him the benefit of the doubt because I just can't quit a once-hyped prospect. Earlier this season, when Smoak would mis-hit a hittable pitch, I'd think "god this guy is hopeless." Now when Smoak mis-hits a hittable pitch, I think "that could've been a dinger!" Justin Smoak is an incredibly prolific almost-home-run hitter.

Other players either got hits or made outs or both and wow I just looked at the time, what have I been doing with myself? I'll close by noting that Torii Hunter was removed from the game due to mild light-headedness, and MLB.com Gameday chose to declare that Hunter left due to a head injury. I'll also close by noting: 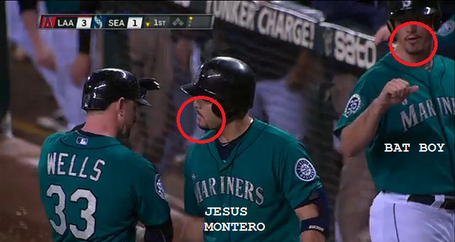 Tomorrow it's Dan Haren and Hisashi Iwakuma. Come Wednesday it's Jered Weaver and Blake Beavan, so I hope you appreciate the shit out of Hisashi Iwakuma tomorrow.