The 2012 Mariners' Most Extreme Hit Allowed

Share All sharing options for: The 2012 Mariners' Most Extreme Hit Allowed

Yesterday afternoon, I decided to take a look at the 2012 Mariners' most extreme hit(s) of the season. I don't know if this is the sort of thing that appeals to anyone else, but it's the sort of thing that happens to appeal to me. When I was writing that up, I didn't have specific intentions of also looking at the Mariners' most extreme hit(s) allowed, but that's what obviously follows so here I am today, doing that! I really enjoy topics that can blend PITCHf/x data with a story because while I like playing with raw PITCHf/x data, it's hard to make that readable and...moist? The opposite of dry. But I don't like "moist" because "moist" sounds disgusting. "Gotta make this PITCHf/x blog post more moist." ugh gross

Anyhow, I'm really happy I wound up investigating this topic, because it led me back to one of my absolute favorite moments of the entire regular season. It's coincidence, but the more you think about it, it's also kind of predictable. This is a post about Felix Hernandez allowing a hit on a ball to Adrian Beltre, and what better pairing could there be for an extreme hit allowed? Beltre swings at a lot of pitches out of the strike zone, and sometimes he turns them into singles. Sometimes he turns them into homers. This time he turned it into a single.

As a quick reminder: by "extreme hit," I'm referring to a hit on a pitch the furthest from the center of the strike zone. I'm not referring to a hit in a zero-gravity environment, or to a hit atop a volcano, or to a hit with a bottle of Mountain Dew. Maybe the reality of what I'm doing doesn't fit your definition of "extreme" but then it's not my fault your definition of extreme is wrong. It's your school's fault, or, more realistically, it's your fault. It's your fault you're wrong. It's almost always your fault you're wrong.

Also, as another quick reminder: we don't have 100% complete PITCHf/x data. It's possible there was a more extreme hit that for whatever reason wasn't captured. It's unlikely, though, and even if such a hit were to have existed, I'm glad to have settled upon this hit. Let us look at it!

When I was looking at the Mariners' most extreme hits, Ichiro's infield single was very close to Jesus Montero's outfield single in terms of pitch location. Looking at the Mariners' most extreme hits allowed, this is the clear winner. The next-most extreme hit was on a pitch full inches closer to the center of the zone. Here, Beltre was leading off the top of the second in a 1-0 game. It was 1-0 Mariners, not 1-0 Rangers, because apparently the Mariners scored a run at home in May. After Felix missed with a first-pitch fastball, he got ahead by generating consecutive fouls, then Beltre laid off a low change in the dirt. That made the count 2-and-2, and Felix came back with a change low and inside. It was a pitcher's pitch, and Felix got a swing, like he was hoping for. But he didn't get the result he was hoping for out of the swing, as Beltre reached base. Beltre exchanged a fist-bump with his own first-base coach because I guess all first-base coaches are disinterested in making their players better at playing.

Where the pitch was when Beltre hit it: 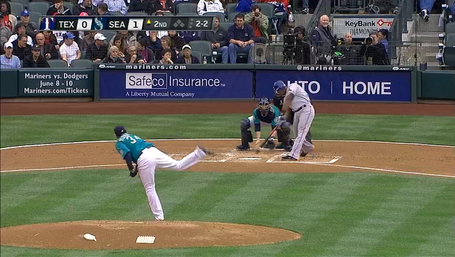 Look at John Jaso. Look at how it looks like he's about to roll a soccer ball to a three-year-old. This pitch was going straight into the dirt. A convenient side view: 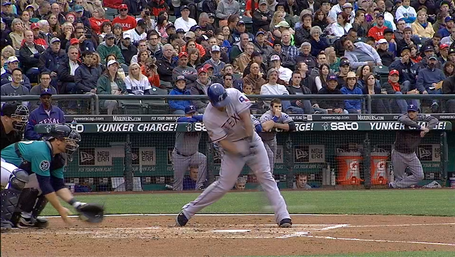 You can barely see the baseball, but you can see the baseball, just above Beltre's left ankle. We've seen Beltre drop to one knee after swinging several times before but somehow he didn't drop to one knee in this instance. Everything about his form actually looks good. It's just the idea to swing at the pitch itself that was a mistake, even if it didn't play out that way.

This was the game that Felix and Beltre started playfully jawing at each other in the later innings. As many know, Felix and Beltre are pretty great friends, and pretty great friends tend to be competitive and they tend to say awful things to one another. You should watch that full video, even if you've watched that full video fifty times before, but relevant to this particular at-bat, here's a .gif:

I don't know why that .gif is moving in faster-than-normal speed but I like it for the additional comic effect. Beltre always says he's going to get Felix, and Felix always says he's going to get Beltre, and here we see Felix accusing Beltre of putting the baseball through the infield, which of course isn't how one player "gets" another. For Beltre to win, he needs to make solid contact. He didn't make solid contact in this at-bat, so he didn't win, and Felix didn't win, either. It was a tie. An embarrassing tie.

Because you're curious, Beltre has now batted against Felix 16 times in his career, with two singles, a homer, a walk, and five strikeouts. I look forward to every single meeting. It's odd, right, because it isn't our friendly competition -- it's a friendly competition between two strangers. Usually, when I see two strangers bantering, I don't think anything of it. But with Felix and Beltre, it kind of feels like we're in on the joke, even if we aren't actively participating. We have involved ourselves in their personal rivalry and we're all better for it.

I'm so glad this post led me back to Felix and Beltre. I'm so glad it didn't lead me to like Blake Beavan vs. Gerald Laird. I didn't know that this post would make my Tuesday better, but here we are.