Seattle Mariners 2012 in Review: The Gloves

From start to finish, the Mariners provided quality defensive play compared to their peers.

Share All sharing options for: Seattle Mariners 2012 in Review: The Gloves

The league championship series began and the rain returned to Seattle. The rain did not gingerly come in, it barged through the door, stripped off all its' clothes and did cartwheels in your living room. Rain, as you may know is a bit anathema to the playing of baseball. Clearly, this confluence of two events signaled that The Controller wished you to not pay attention to the live baseball being played elsewhere in this great domain of ours. No, you were meant instead to be inside and reflect on baseball past. That is what rain is for and so shall we do.

Yesterday we gathered ‘round the internet fire and acknowledged the 2012 Mariners' offense. We mourned it as one mourns a deceased gerbil. We never had much faith in a long life, but many did entertain some hope that it would persist longer than it did. Oh! Poor Superdude, you deserved better.

Today, I steer your attention toward the other duties of the Mariners' position players. They were not much with the bats, but they were good with the gloves. The infield ranked 8th by my measurements and the outfield 5th good for an overall ranking of 3rd. 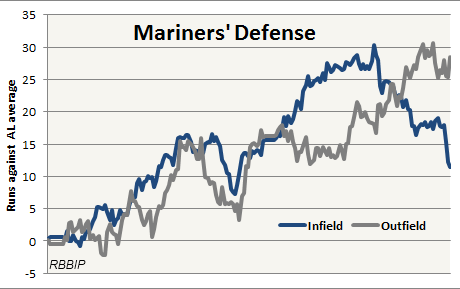 Fielding is quite volatile so I wouldn't freak out over small movements; the larger trends are what's important. Ideally, when the lines move dramatically in positive or negative directions, there'd be a corresponding change in personnel that could be correlated (but not proved causal) to the movement. There was little of that this year.

On the infield side, the players involved were remarkably stable. Justin Smoak started 129 games at first base; Dustin Ackley started 142 games at second base; Kyle Seager started 137 games at third base; Brendan Ryan started 134 games at short stop. If you take the four positions, multiplied by 162 possible starts, the above four players took up 84% of those possible starts. So, that huge dip in the infield's rating in September? No idea.

The outfield was a bit more stable, basically being constantly above average and in spite of a much heavier turnover in starters. Michael Saunders notched the most outfield starts on the team and it was only 133. Ichiro Suzuki had the next most at 93 and then Casper Wells at 74, less than half a full slate. Nobody else on the team eclipsed 40 outfield starts.

The success of the players at turning batted balls into outs in the field does help to blunt their keen ability to turn pitched balls into outs at the plate, but it doesn't entirely make up for it. Combining the hitting (wOBA-based) and fielding (RBBIP-based) numbers, the Mariners ranked 28th this season. They were within shouting distance of several teams ahead of them however as the Indians were just 8 runs better, the Blue Jays 14 and the Marlins 16 for example. Compare that to the two teams behind the Mariners, who were 32 runs worse (Royals) and 67 runs worse (Astros).