Share All sharing options for: The 2012 Mariners' Most Extreme Hit(s)

It's the offseason, and my favorite part of the early offseason is that there aren't any more Seattle Mariners baseball games to watch. Maybe that doesn't sound like a superfan's opinion but if you're a Mariners fan you know exactly what I'm talking about. Come December, January, February, maybe we'll miss having the Mariners on TV, but right now all I can think is "books, I can read books." I don't actually read books, because come wintertime I'm always in need of firewood, but it's just nice to have the option. It's necessary to have time away from the Mariners to prepare for more time spent with the Mariners. You know those relationships where two people just spend all of their free time with one another? Yeah, those relationships are fucked.

The thing to do in the offseason is to look ahead and talk about moves the team could make to improve and hopefully contend in the season to come. People have already started doing that with the Mariners; people started doing that with the Mariners months ago. We'll do that here, too, but there'll be plenty of time to do that in November, after the playoffs are over. Because the playoffs are still going on, in my head it's still the 2012 season, so in my head this is still the time to review the season that was. With everything finished, we should take some moments to reflect before we move forward.

When reflecting, I love to look at extremes. It doesn't do us a whole lot of good to say like "Kyle Seager was pretty good" or "Dustin Ackley was pretty bad" because we already know that and we've been talking about that forever. But with the entire Mariners season in the books, we can spend time talking about, I don't know, Carlos Peguero's one walk. The longest home run any Mariners pitcher allowed. The longest home run any Mariners hitter hit. Extremes can be fascinating because we're often fascinated by extremes, and now we can say that the extremes are official. They will not be topped, for there are no more games.

For this post, I wanted to identify the Mariners' most extreme hit of the season. And by most extreme hit, I mean the hit on the pitch furthest from the center of the strike zone. That's one way to be extreme. We know that various Mariners batters swung at a lot of balls. Which of those swings resulted in hits? Which of those hits was on the worst ball? PITCHf/x data allowed me to investigate. PITCHf/x data is a pretty good friend of mine and we spend a lot of time hanging out and picking each others' brains. I'm usually picking its brain instead of the other way around. Let's continue.

Because this is based on PITCHf/x data, it can't be considered 100-percent accurate, because the data is missing a few pitches here and there. There's nothing I can do about that, short of watching video of every single Mariners hit and trying to map where the pitch crossed the plane of the strike zone. I wouldn't do that even if it meant the Mariners could drop Chone Figgins and his whole entire salary without any consequences. I might start, and I might even make considerable progress, but ultimately I'd be like "fuck it, more Figgins." Few things are worth that effort.

But I'm pretty confident in the results because even though we're missing some data, we have the overwhelming bulk of the data. So, the Mariners' most extreme hit of the season? Unsurprisingly, it was an infield single by Ichiro. 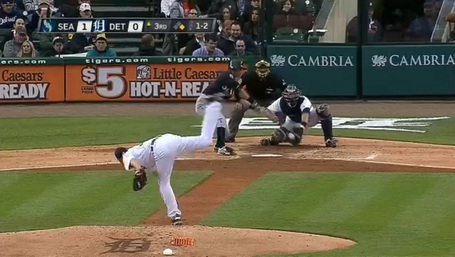 Ichiro's batting approach is not good. It never has been. At least, it never has been, in general. It's been good for him, obviously, which we can conclude just based on the fact that he's been Ichiro for almost two decades. Ichiro swings at a lot of pitches out of the strike zone. It's worked because Ichiro can make contact with almost anything, and it's worked because Ichiro can run. Swings at balls well out of the zone often lead to grounders, and weaker grounders, and Ichiro's always been able to beat a lot of those out. I'd say there was justifiable skepticism around Ichiro when he first came stateside, but there's no questioning things anymore, and while there will be a lot of lingering images once Ichiro hangs up his cleats, one of them will be him getting a single off a pitch he had no business singling off of. A pitch a lot like this one.

By the numbers, that was the Mariners' most extreme hit. However, because there's some sort of error within the data, we can't assume the numbers are absolutely precise, and we have to consider other hits that were close to being so extreme. And there was one of them that was mighty close. It was not hit by Ichiro. It was hit by the opposite of Ichiro? 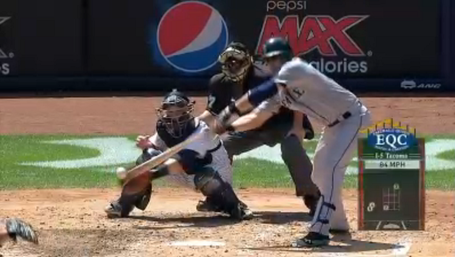 Technically, this pitch was less extreme by something like half of an inch, but again, there are error bars, so maybe this was as extreme or more extreme. I know exactly what you were hoping to read today, and what you were hoping was to be reminded that Jesus Montero swings at a lot of outside sliders when he's facing right-handed pitchers. I know nothing makes me feel better about the Mariners' long-term outlook than knowing one of their brightest young potential stars has a generally incurable discipline defect. Because we haven't seen enough of this particular defect before. Did you know that Jose Lopez has a .615 OPS since 2010 and is 28 years old?

What kills me about this is the fist-bump with Mike Brumley at first base. Actually what kills me about this is the everything, but the fist-bump is the ultimate in results-based analysis. It's tacit encouragement, positive reinforcement, like Brumley is saying "yes, keep swinging at those, surely you will make a habit of turning them into base hits like you just did, that wasn't the least bit fluky." Here's how a better first-base coach would've behaved:

When Ichiro would convert bad swings into hits, it was fine, because that was just Ichiro being Ichiro. When other players would convert bad swings into hits, all that would do was set them back. Players don't need to know that they can reach base by making mistakes. That will only encourage them to believe they have the ability to generate base hits by making mistakes. Every time Jesus Montero singled on an outside slider off the plate, he was given reason to believe swinging at those sliders isn't so bad. Thankfully I think he only singled on an outside slider just this once. BECAUSE HE IS TERRIBLE AT THOSE PITCHES

This post wound up angrier than I expected it to. Yeah, no, I really don't miss having Mariners games on TV at all.