Seattle Mariners 2012 in Review: The Hitting

The Seattle Mariners were not good at hitting the baseball this season, but they were markedly better than last year.

Share All sharing options for: Seattle Mariners 2012 in Review: The Hitting

In (March and) April of 2012, Chone Figgins went to the plate 99 times for the Mariners. He got only 95 plate appearances the rest of the year.

On May 1, the 2012 Seattle Mariners' offense was graded (by me) to already be 17 runs below average after 24 games. On May 1, 2011, after 28 games, the Mariners' offense was at "just" nine runs below average. The 2011 offense went into free-fall in May, June and July though, losing 119 runs to average over those three months. That was capped off in July when the team scored 72 runs in 26 games and under performed the American League average wOBA by the equivalent of 54 runs.

Lucky for us, or those of us who kept watching, such a Baumgartner-like fall didn't happen in 2012. This year's team was still bad, but it was less bad. They were less offensive, which is to say they were more offensive. And despite an 11-18 record from September 1 on, the team's .708 OPS over that final month and change was nearly up to par with the rest of the league! 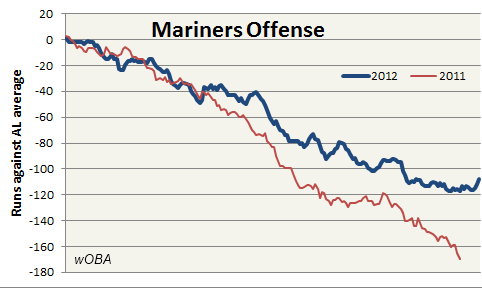 The true nature of this team's offense may be hard to glean. Park effects play an integral part but we look — or should look — at those on a rolling three-year basis. If there's a change in how the park plays, be it from unusual weather patterns or, more concretely, new fences, that doesn't get fully reflected in the factors. For no reason other than my curiosity, I posted the park factors using 2012 data only. Here's a comparison between those and the actual three-year factors that get used to adjust wOBA above.

And those three year factors are 1/3-weighted down by 2012's clearly harsher environment. The difference between 2009-11 and 2012 is even starker. If I used only 2012's factors above, the Mariners would end up with about a 12-run bump which would totally... okay, they were still awful.

Save us new fences!