Among the many criticisms that have been flung at the Mariners organization is that they'll use any excuse to remind people about 1995. There's nothing wrong with reflecting on a magical season, of course, but the frequency has rubbed some people the wrong way, and it might also come off as kind of desperate, as the Mariners haven't accomplished that much since. What I think the problem actually is is that the Mariners have just been bad, and a bad baseball team makes people want to complain, but 1995 was a long time ago. Maybe we don't need so many reminders and reunions.

But now I'm the one using an excuse to look back on 1995. See, last night, in Game 1 of the ALCS, Derek Jeter fractured his ankle attempting to make a play on a grounder up the middle. Jeter was knocked out for the rest of the playoffs, so today, the Yankees played Game 2 of the ALCS without him. It was the Yankees' first playoff game that didn't involve Derek Jeter in some way since October 8, 1995. Back then, Jeter was on the playoff roster, but he didn't actually play. You might recognize October 8, 1995 as being the date of ALDS Game 5.

Here is a .gif I have prepared of Derek Jeter sitting in the dugout after the Mariners came back to win:

Also I threw in some Mariners celebrating because I'm a big fan of juxtaposition. Look at those pants. Those are such tight white pants. Here is a screenshot of Derek Jeter walking away from the camera in the dugout: 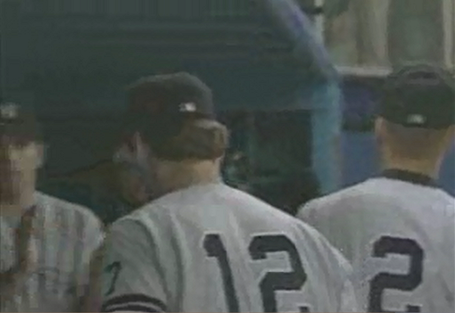 I don't know why I captured these images, but I guess I wanted to prove that Derek Jeter was present. Now, October 8, 1995 was a long time ago. It was almost exactly 17 years ago, as a matter of fact, meaning there are people driving on freeways today whose parents hadn't yet even enjoyed a magical and intimate evening. We don't need proof that it's been a long time since the Yankees played a playoff game without Derek Jeter, since we just know that to be a fact, but despite that I've taken a few more screenshots from Game 5. I kind of got sucked in. Turns out Game 5 of that ALDS was one of the greatest games ever? I wish someone would've clued me in. Here is a shot of Andy Pettitte warming up in the bullpen in the later innings: 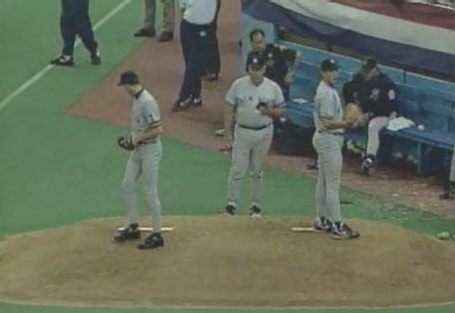 That's Pettitte, the lefty, warming up beside Jack McDowell, who would later lose. At the time, Pettitte was a 23-year-old rookie who had already started Game 2. Here's Alex Rodriguez coming to the plate: 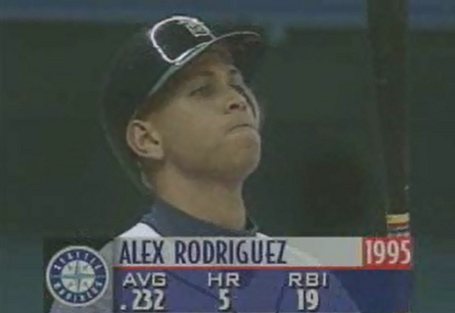 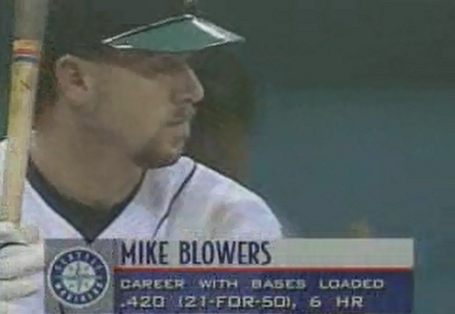 He was 30. His opponent in this particular at-bat was one Mariano Rivera, called in out of the bullpen: 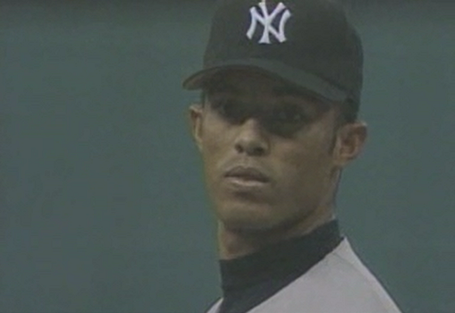 Rivera was a 25-year-old rookie who that regular season started ten games. He had been included in trade rumors until the Yankees learned he'd suddenly gained velocity for no reason in the minor leagues. This was a couple years before Rivera even ever started throwing the cut fastball that made him a legend. For an idea of just how long ago this really was, here's how Rivera was introduced by Dave Niehaus on the broadcast:

How that Rivera vs. Blowers at-bat ended, just for funsies:

Rivera became dominant the very next season. He ended the 1995 season on a high note, personally. Were there people watching him in Game 5 and thinking he'd go on to become a Hall of Famer down the road? There were probably not zero of those people!

The purpose of this post: October 8, 1995 was a long time ago. Until today, that was the last time the Yankees played a playoff game without Derek Jeter, and that was also the date of the most famous plate appearance in Seattle Mariners history. Maybe it was a stretch to connect the Jeter injury to the Mariners, but looking back on this made me happier, and hopefully it made you happier, too. And if not, Seahawks! Maybe you were made happy by the Seahawks!