There was a valuable lesson for us to learn from the Baltimore Orioles and the Oakland Athletics. The lesson was contained in the year-end standings, and in the year-start projected standings. Let's re-visit, shall we? From the very very beginning, some projections:

There's no such thing as a shoo-in, and there's no such thing as utter hopelessness, not with any actual real-life examples. Maybe the lesson would've been driven home deeper had the Athletics or the Orioles advanced to the ALCS, but they did well enough. And while I think it's too bad that Baltimore lost a winnable series to New York, this is good news for a certain Ichiro Suzuki, which makes this a good silver lining for Mariners fans who appreciate everything Ichiro did for some real shit Mariner teams.

Before last week, Ichiro's most recent playoff game took place on October 22, 2001, in New York. He went 1-for-5, the Mariners lost 12-3, and the season was over. Ichiro was 27 years old, and approaching 28. For the next ten years, Ichiro tried his damnedest, and for the next ten years, the Mariners fell at least a little short of the playoffs, and mostly a lot short. It hurt when Ichiro got traded, but at least, we figured, he was getting traded to a team going to the playoffs. At least he'd get his shot at October.

Then the Yankees nearly frittered it all away. But, with Ichiro's help, they didn't, and, with Ichiro's help, they're a series away from the last series. Ichiro's not the only high-profile former Mariner on the Yankees' playoff roster, but he's the one who's been waiting for this the longest, and I find him to be the easiest one to root for. I don't make a habit of rooting for the Yankees in the playoffs, but Ichiro gives me a reason to not be too upset by the Yankees' success.

A really fascinating question is where Ichiro might end up next year. At the time he was traded, I wasn't sure there would be a next year, since Ichiro's numbers were poor and not showing signs of getting better. Then he batted .322 with the Yankees and more or less looked like an older version of his younger self. Ichiro looks entirely capable of a full and successful 2013, and I haven't the foggiest with whom he could sign. It'll be one of the offseason's bigger stories, at least as far as I'm concerned.

But on this October 13, Ichiro himself isn't thinking about next year, because he's kind of still got this year going on, with the Tigers being the next opponent. Ichiro's deserved this and now Ichiro's getting this, and I'm glad that he seems to be living it up, even if it isn't in a Mariners uniform. I'm by no means convinced that Yankees fans deserve to have Ichiro, but Ichiro does probably deserve to play for the Yankees, since the Yankees could do for him what the Mariners for so long could not. There are Ichiro haters out there who can't believe a word of this blog post, but for me, Ichiro is making the Yankees tolerable. I know that Yankees success makes Ichiro happy, and I so badly want for baseball to make Ichiro happy. It doesn't actually make a meaningful difference in my life, but there's nothing wrong with warm fuzzies.

Like most players, all Ichiro's ever wanted is to win a World Series. He couldn't do it in Seattle, and then when he was traded to New York, it looked like the Yankees might've just had to take Ichiro along on the ride. Now Ichiro's actually contributing to the effort, and he's only a handful of wins away. I don't know if I want the Yankees to win it the most. I do know that, if the Yankees win it, I'll be pretty not-disappointed. 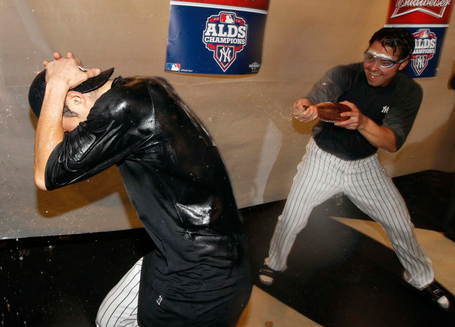