Share All sharing options for: Take Three on Opt Outs

It began as a little hook in the back of my brain that the Prince Fielder talk was getting to be too much. Over time, as Albert Pujols and C.J. Wilson signed with Anaheim and Yu Darvish was slaved to the Rangers, it grew more insistent. Mariner fans were full-blown obsessed with Prince Fielder and that's almost certainly a bad thing. It's understandable, given his stature as a hitter and a team so woeful at hitting, but tying up so much emotion in one person is unhealthy. Prince Fielder is not a savior for this team and if he signs elsewhere, it's not the end of the world, baseball or otherwise.

Still, I wanted to return to the Prince Fielder well because for a third time, I was thinking about opt-out clauses. I haven't communicated my initial thoughts well enough so I wanted to take another stab at it, this time with hopefully more precise definitions.

Suppose that Scott Boras and Prince Fielder come to the Mariners with two contract options, both agreeable to the team, but one comes with a player opt-out included and the other without. Apologies if you are the sort of person who shivers at math equations. It's a phobia you should get over. Here are the major variables at play:

A player option to opt out is a benefit to the player not the team, so including one should never result in a higher player salary. That means the salary with the opt-out (O) should never be greater than the salary without one (S) and such a possibility is not worth discussing. O equaling S is similarly boring as can be seen in the equations below. Instead, it's when S > O that it gets interesting to me. To figure out how the two contracts compare to each other (important qualifier alert), the following step function applies (complaints about formatting to be directed at HTML).

If you're unaware of the sigma notation, please see here.

That's a lot to unpack so I will type words that might help. In equation one, if Fielder plays out the entire contract then the opt-out doesn't matter and the Mariners get a benefit equal to whatever discount Fielder gave them in exchange for having the option in the first place. For example, if Fielder would sign a contract for $1 million less per year that includes an opt-out and then doesn't use the opt-out, the Mariners saved $1 million per year. Hooray! This is the simple equation.

Equation two is more complex so I'll split it up between the two terms. The first term is identical to equation 1 except that it stops at N instead of Y because that's when Fielder opts out. Theoretically Fielder only opts out if he's over-performing his contract so the second term calculates the value the Mariners lose out on when Fielder does that. That's equal to Fielder's performance level (P) subtracting away the salary he would have been at if he didn't have the option (S). What's funny about it is that Fielder's actual salary (O) when he opts out doesn't matter. What matters is the salary the Mariners would have had to pay Fielder (S) to not give him the option.

Note that if S and O were equal then equation 1 is zero and equation 2 would always be negative unless P < O, in which case Fielder wouldn't opt out anyways and you'd go back to equation 1. So if Fielder offers no discount for the option, then the team clearly shouldn't give it to him.

I always like to use an example with formulas because they help me follow the math logic so consider the following values for the variables.

In this case, Fielder offers the Mariners a $2M discount per year in exchange for the player option. Here's a graph of difference between the two contracts, from a Mariners' perspective, depending on how well Fielder performs (P). 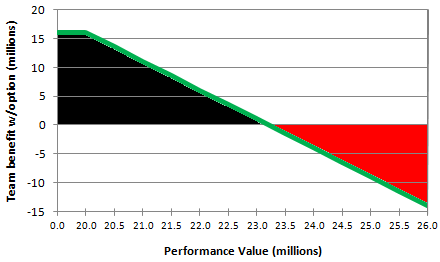 Here's what interests me. If the Mariners expect to get $23M in value each year (simplifying assumption alert) from Fielder, then obviously both deals are suitable, but even though it should seem like the Mariners would be bummed that Fielder would opt out when he's giving them a net benefit at the time, they'd actually be more profitable with the opt-out contract. For the first three years, the team would save $2 million a year (paying him $20M/year instead of $22M/year for total of $6M) by including the opt-out, but then Fielder uses the opt-out and instead of having Fielder (at $22M/year) for the next five years, they have nothing. That's $5M in lost value.

Fielder opting out doesn't benefit the Mariners, but the discount he gave them outweighs the lost benefit. Now I use the term more profitable intentionally instead of the more ubiquitous term ‘better'. For one, this is a simplified two-variable evaluation and as I've tried to demonstrate previously, it's more complicated than just that. Secondly, and the root of my original wondering, timing is an issue. For the Mariners, if offered these two potential outcomes, might they prefer Fielder over eight years, even at the cost of a little profit, so that they could spread out the number of chances (years) the team as a whole has to succeed with Fielder?