Share All sharing options for: A Pitcher's Sudden Downfall

When we offer up pitcher comparisons, it's typically not in a flattering light. Often we use it to show how two pitchers with differing won-loss records and/or ERAs have actually pitched very similarly and just been beneficiaries of different luck or defenses. The recent Randy Johnson and Felix Hernandez post was different and this comparison continues that more positive, initially, mood. Consider the following two pitching lines combined over a five season sample and park-adjusted.

Those are pretty similar, no? Pitcher A has the better strikeout and walk rates — by a hair — while Pitcher B has the better ground ball rate and seems to have better durability, but it's a bit of an unfair comparison because Pitcher A's (clue!) sample encompasses the 1994 and 1995 strike-shortened seasons. Four numbers do not tell a complete enough story of a pitcher to make a relative judgment, even if they are what I believe to be the four most important numbers. Characteristics like age, quality of opponents, fastball speed and such are necessary factors to consider as well. In that realm Pitcher B wins so please do not confuse this comparison with a claim that the two are equally good or desirable. I use it instead to highlight key performance similarities and because Pitcher B — Felix 2007-11 — is familiar to us while Pitcher A — at least this part of his career — is more forgotten. Have a guess as to the identity of Pitcher A?

Pitcher A is Jeff Fassero from 1993 through 1997 as a Montreal Expo and then Seattle Mariner. It surprised me how good Fassero was back then as I tend to only remember his 1999 season. Was there hype surrounding his trade to Seattle? He hadn't, and would never, made an All-Star team and though he had a fabulous 1996 season prior to the trade, he finished just tied for ninth in Cy Young voting behind a sizable Atlanta Braves and Los Angeles Dodgers bloc. I don't remember feeling excited about him, but I don't have a firm grasp on how I felt about anything 15 years ago other than that Jurassic Park 2 was a terrible movie.

Perhaps it was due to Fassero's unusually late start. He didn't even reach the Major Leagues until he was 28 and then spent three years in relief work. Still, he came to the Mariners in 1997 and opened the season for them with Randy nursing a back injury. Fassero would also be credited with the win in the Mariners' only playoff victory against the Orioles that year.

Fassero pitched another good season in 1998 and then 1999 came and everything fell apart for him. The strikeouts dropped, the walks shot up and the fly balls were flying over the fence. He allowed 34 home runs in just 669 batters faced (139 innings). While with the Mariners that season, more than 1 in 20 batters he faced hit a home run. Only two other pitchers* in Major League history have topped that rate over as many batters as Fassero faced.

*Jose Lima in 2000 and Bronson Arroyo last year. Jamie Moyer in 2004 came close and is maybe worse since his season came in Safeco while Fassero's was mostly in the Kingdome. Moyer is also the only pitcher to date to allow five home runs in a game at Safeco Field.

It was a disaster of a season. In fact, no pitcher with at least 550 batters faced has ever posted a worse FIP than Fassero did as a Mariner in 1999.

Statistically it seemed to come out of the blue and there's no way to prove conclusively that it didn't. However, there are two pieces of data that I think are prime suspects for the cause of Fassero's crash. Over the winter between the 1998 and 1999 season, Fassero underwent surgery on his left elbow to remove bone chips. According to reports, he lost nothing in terms of stuff, but his mechanical consistency disappeared. That could be a post hoc explanation for the increased wildness. Release point data would be valuable evidence, but we don't have that. 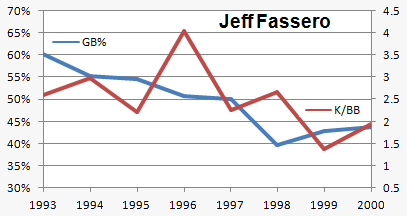 It had been declining prior, but something crippled it that year. He managed to compensate with a still robust strikeout per walk ratio, but perhaps the foundation for collapse was now set in place. When Fassero’s command slackened in 1999, suddenly he seemingly was serving up exclusively balls or gopher balls. Amazingly, the Mariners would end up trading Fassero in August of ’99 to the playoff bound Texas Rangers. Even more amazing is that Fassero hung on for another seven seasons mostly as a below average reliever. I don’t remember him for his late start, longevity, or dominant stretch though. I remember him for breaking down with a speed I had never seen before.