Share All sharing options for: Felix Hernandez vs Randy Johnson, the Mariner

First, here is the pair's relevant (my opinion) raw pitching numbers from their times as a Mariner.

Randy might be remembered as more dominant and untouchable thanks to that extraordinary strikeout rate. Strikeouts are like dingers, but for pitchers in the way they stick out in people's collective memory. Meanwhile, home runs allowed are kind of like double plays hit into and walks are kind of like, well, walks.

I included the number of batters faced per start to show that despite the trend toward fewer innings pitched, the pair have actually been similarly workhorse-like so far. It's like Boxer and Boxer 2. Of course, raw numbers are a bad way to compare people, especially ones that played in different time periods. So first, I'll park adjust them using my StatCorner method and Retrosheet data.

Both pitchers have their strikeout and walks rates fall and home run rates rise. Five-sixths of those changes probably will not cause a lot of surprise, but Randy's home run one might. The Kingdome is thought of as a home run-happy park and while that's mostly true, it's overblown and not always consistent, not unlike weather forecasts or anything ever relayed by Jon Heyman.

The park factors I have for 1989-98 show a home run factor of 109 for left-handed hitters in the Kingdome, but just 97 for right-handers. Why that split exists I don't know, but it's there and for his career, Randy faced right-handed hitters 88% of the time. Safeco may have been built to inflate Ken Griffey Jr's hitting numbers, but it also would have been the perfect park for Randy Johnson to pitch in. It's a good thing neither stayed around to truly find out!

With the numbers tweaked for the parks, it's time to plot them against the league averages over their respective Mariner careers.

This is perhaps the clearest picture of how strikeout dominant Johnson was, and this isn't even including his run with Arizona. Being 71% better than league average is eye-popping in the (luckily only) figurative sense. Unlike a fork, which can be eye-popping in the literal sense, but rarely is in the figurative. Randy's high walk rate, however, is also laid bare and the Big Unit's strikeout per walk ratio was in fact lower than King Felix's is so far. All told, if you want to compare the two's production, the FIP and WAR columns are probably your best bet and they show almost identical values. The two aces take slightly different roads, but end up in nearly the same place.

In case you wanted to look at some colors and/or were interested in what those league average rates were, here's a graph of them! 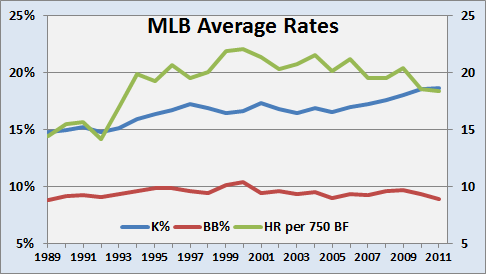 And if you're interested, here is the same graph plotted over the post-WWII era. What's up with you, 1987?