Jesus Montero has More Questions to Answer than Michael Pineda

Share All sharing options for: Jesus Montero has More Questions to Answer than Michael Pineda

About a day later and my overall feelings surrounding the Jesus Montero and Michael Pineda trade have not changed much. I'm not going to rehash the details of the trade. You know them and the general thoughts on the players involved by now and if not, you can find them easily. Just scroll down for instance. Instead, this is wholly about my personal reaction, thoughts and responses to some common themes that I've been reading.

First, I should dispel a myth. Michael Pineda did not fade down the stretch. I'd bet heavily that a majority of people saying that are looking no further than his won-loss record or ERA by half. Pineda posted a winning record and a 3.03 ERA before the All-Star Game and a 1-4 record with a 5.12 ERA afterward. If that's your way of measuring how a pitcher performs, then a conclusion that he faded is justified. That's a terrible method though and is quite misleading. Here's how Pineda's ability to throw strikes (Zone), miss bats (Miss) and his corresponding walk and strikeout rates (per batter faced) changed month-to-month. 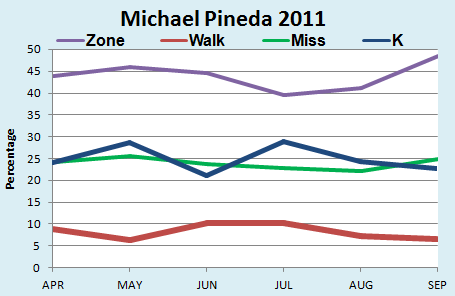 That's not much variability at all over relatively similar sample sizes. Pineda faced 126 batters in April, 126 in May, 156 in June, 118 in July, 95 in August and finally just 75 in September when he was shut down early for reaching his innings limit. Pineda's home run rate did spike in the second half, but most of his superficial results were driven by random events, not a degradation in his core skills.

Another argument I've read that I abhor is anything along the lines of "well, the Mariners had to make a move for a bat." Now, perhaps upper management dictated to Zduriencik that he had to make some significant move for offense. That seems unlikely however and we can't assume they did. Even more figuratively, the team didn't have to make a move, that's just a silly way of phrasing it. If the intent behind that statement is actually, "I think trading a run allowed for a run scored is a net benefit to the Mariners at this point if only to alleviate media pressure," then that's a possibly interesting debate to have that avoids anchoring anything in absolutes, which stifles dialogue. Seriously, don't make absolutist declarations, especially when they are opinion-based. Those are uninteresting.

Similarly, some have mentioned that Yankee fans are upset about the trade as well and it's the sign of a balanced trade when both fan bases are upset. While that's a good notion, it relies on an assumption that the two collective fan bases are equally adept at analyzing baseball. Is that valid in this case? I don't know, but given the general fan and media coverage of Pineda compared to Ivan Nova, I happen to have a dim view of analysis stemming from Yankee players.

Judging the overall package itself, if asked to grade it on Jeff's 1-10 lasagna scale then I'm more in the four category than the five. I am less enamored with potential and prospects than many people seem to be. I prefer seeing players generate hype from their numbers than from scouting reports. Currently, Montero is more in scout hype than number hype territory and you frankly cannot find a bigger question than whether he will catch or not. By positional values, the difference between a catcher and a DH is 30 runs over a full season. Thirty flippin' runs! That's ginormous. It's a huge factor in what kind of player Montero ends up being.

Of course, there's a middle ground wherein Montero might be fine enough to catch half the time while his bat plays at DH the other half. That would also probably be satisfactory. Something like 60 starts at catcher and 100 starts at DH would result in a positional value equivalent to a corner outfielder. I would probably be content with an arrangement similar to that. It's mostly the possibility that Montero is nothing but a DH that concerns me defensively. I am comforted by seemingly every scout's opinion that Montero has a monster bat, the sort of talent unseen in Seattle for years.

Michael Pineda has worries and risk as well for sure. However, the worries should not originate from any imagined decline during 2011 as hitters adjusted to his two-pitch repertoire. As above, that didn't quite happen. However, Pineda is a young pitcher and those are risky assets, riskier than hitters, and pitchers tend to lose fastball velocity over time. Both players have significant talent and important questions attached to them, but at the time, and still today, I believe that Montero's future is currently murkier than Pineda's. I feel that their ceilings are roughly similar, but 2011 alleviated more of my concerns about Pineda than it did about Montero.

Now the team's scouting could be optimistic about Montero spending some time at catcher and believe in Noesi's reported velocity gain over the winter. We don't have access to their information so we should allow for a decently-sized margin of error when trying to judge a deal such as this. Additionally, having questions does not mean that Montero and/or Noesi (or Pineda and/or Campos) cannot ultimately answer them. The future isn't just hard to predict, it's impossible to predict. It's unknowable. It can unfold in countless ways but we will only experience one of them. That's a terrible formula for trade evaluation. All four players will now develop in ways that are different from in the timeline(s) where this trade doesn't occur.

The valid way to evaluate the move is by what we know and can reasonably now. We can re-evaluate if we eventually discover a greater insight into what the teams knew at the time, but I caution against using the future performance of the players to declare a winner or loser here. I'm slightly against it, but I won't disagree with someone who has more faith in Montero's bat or Noesi's arm than I liking the deal. I think it's perfectly reasonable to like the trade or not like the trade. It's anything in the love or hate range that I feel is probably an overreaction.

Either way, I think there might be too much negative emotion running amok still so here's some cute animals. 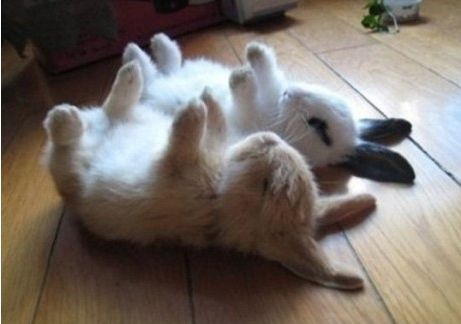 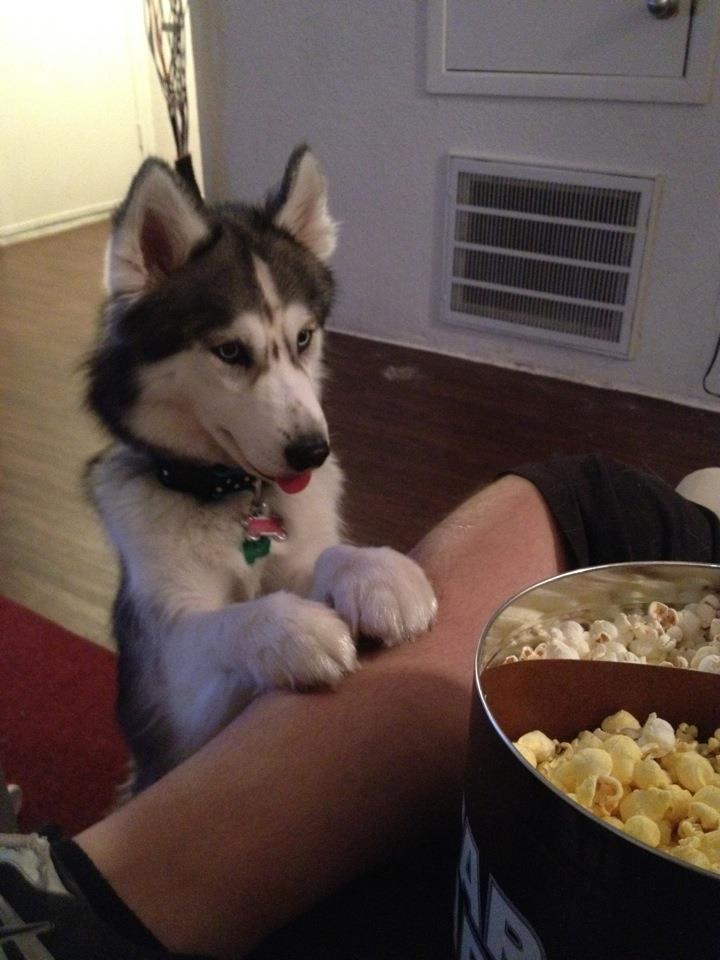 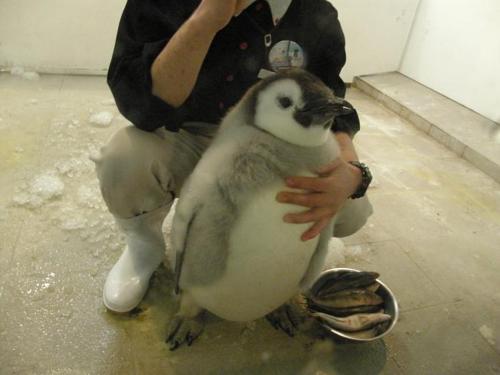 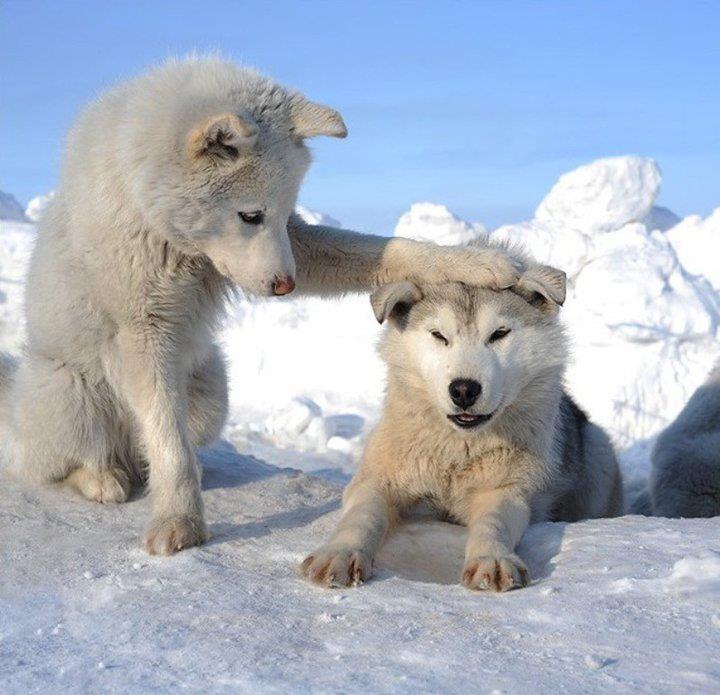