Mariner games have become mercifully short — by baseball standards, they are still an extraordinary long time to take a shower for — the last few years as the offense has collectively decided that scoring runs is just really hard and they probably shouldn't bother trying anyway. It wasn't always that way obviously and back when the team did employ a bunch of selfish run-scorers, Mariners games were some of the longest in baseball. Back in November when I revisited the subject of average games lengths by starting pitcher, I included a graph of average game durations by team featuring the already known fact that the Mariners had the shortest time of any team in 2011.

During the prep for that post, I made a graph of that average game duration but plotted it exclusively for the Mariners and broke it up by season over their existence. Two months passed and I apparently forgot or deliberately did not post it. Well, now I am. 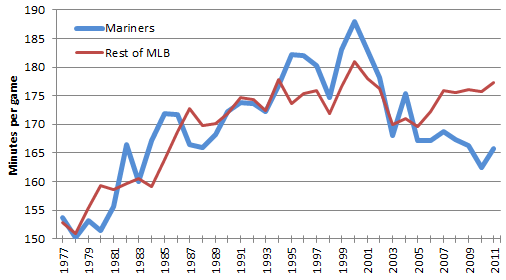 Unsurprisingly, when offense goes up so too do game times and with the recent and prolonged spate of apathetic offense, the Mariners have been in a period of significantly shorter games than the rest of the league. What I hadn't thought of before however was just how much extra time saved it all added up to. So I thought of that and then I added it all up because I am a human being in possession of basic math skills, a interest in sometimes trivial facts and a copy of Microsoft Excel™.

The 2011 Mariners averaged 166 minutes per game while the other 29 teams in baseball averaged 177 minutes per game. Without the rounding, it totalled (over 162 games) 1,859 fewer minutes of baseball than average. That's a smidgen under 31 hours! A crazy person with nothing better to do than watch every inning of Mariners baseball in 2011 saved 31 hours that he or she could spend doing those things that ranked below "watching the Mariners" on his or her life priority list. Here's a brief sample of some of the activities that could have been accomplished with that free time:

-Infected roughly 5% of London's population with a violence-inducing virus.
-Run the Ultra-Trail du Mont-Blanc® if you weren't so hideously unfit.
-Stopped 1.3 massively complex and conspiratorial terrorist plots aimed at either detonating a nuclear bomb in LA, meltdowning a nuclear reactor in LA or detonating many nuclear bombs in LA.
-Slowly rotated in sync with asteroid 1159 Granada.
-Replaced about 0.3% of your liver.
-Easily won Deathrace 2011.

By the way, if anyone out there is a Red Sox fan of similar temperament to this hypothetical Mariner fan, then congratulations, you watched 48 additional hours of baseball over the 2011 calendar year and you didn't even get the playoffs out of it. Humanity is grateful because you probably would have spent those two days interacting with other people while being an insufferable Red Sox fan.