Share All sharing options for: The New, Improved? Jason Vargas

I actually missed the game last night because we have guests in town, but fortunately it's becoming easier and easier to catch up. Video highlights and various recaps have filled me in on all the action, and just this morning (or late last night) Drayer chimed in with an interesting post on a mechanical adjustment by Jason Vargas. Her words:

What did he get from Felix? If you were watching closely last night you saw it.

"It was definitely a turn," Vargas told me after the game. "Something that I talked with Felix about."

He was talking about the Felix turn or twist, or "hitch" as catcher Chris Gimenez described it.

Last night, Jason Vargas featured a twist in his delivery that he picked up from Felix. Nevermind that Felix presumably picked up the twist from Erik Bedard - what's important here is that Vargas made a change, and succeeded. So let's look at the change!

Here's Vargas from his June start against the Phillies:

Do you see it? Just in case you don't: 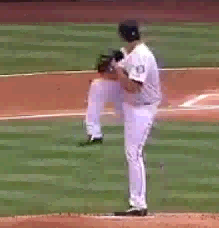 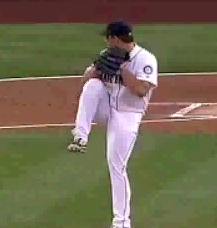 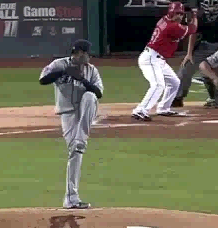 By adding the twist last night, Vargas had his back to home plate when his knee came up. Used to be that his right foot pointed kind of towards first base. Yesterday, his right foot pointed towards second. It's both a minor change and a major one, in that it's just a little twist, but a significant adjustment to Vargas' timing.

"Definitely more swing and misses on fastballs down in the zone. It was harder to pick up and it allows me to stay closed a little longer. It added to my fastball and I was able to keep my command. It definitely made my curveball better."

There are two primary claims:

The first one is verifiable. A graph of the Royals' swings and misses against Vargas' fastballs and fastball-like pitches: 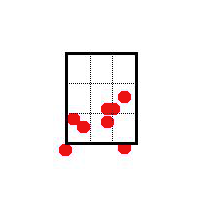 And the second one is also verifiable. Vargas' average pitch velocities last night, compared to his overall season numbers:

It wasn't just PITCHfx inflation, either. Everybody else was pretty much normal. The evidence very strongly suggests that, last night, Jason Vargas was throwing all of his pitches a little harder than before, by more than one full tick. Probably because he was staying back longer and generating more oomph.

So, clearly, this is most interesting. Jason Vargas made an adjustment to his delivery, and it seemingly allowed him to increase his pitch speed while decreasing his hittability. It's easy to understand how the twist might add to his deception, and it's around now that I have to point out that Felix became Felix right around when he added the twist. Something to think about.