Share All sharing options for: Ichiro Is Amazing, Volume 3,716

Last night, Ichiro stepped in against Luke Hochevar to lead off in the bottom of the first. That's when he did this, against this first pitch: 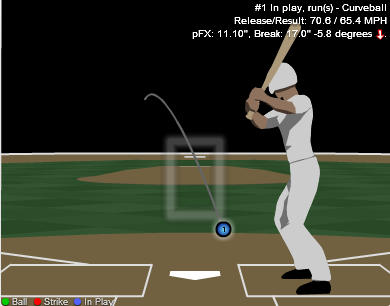 That's a first-pitch curveball, a little out of the zone. Not only did Ichiro swing at it - Ichiro made contact, and obliterated the pitch into the right field stands. Said Hochevar:

The entire sequence was incredibly rare. Going back to 2009, PITCHfx has identified 83 first pitches as curveballs, or 0.6%. Of those 83 first-pitch curveballs, batters have swung at just three of them. Of those three swings, two have resulted in fouls, and one has resulted in a home run - Ichiro's swing, last night.

I don't know if there's any greater meaning to this. I don't know if I have to look for it. My sense is that, no, I do not, because the event was sufficiently remarkable on its own. Last night, Luke Hochevar threw Ichiro a curveball with his first pitch of the game. It was a good curveball. Ichiro swung at it and hit a home run. Amazing.