Charlie Furbush, Jerome Williams Duel Despite This Being The Year 2011

Share All sharing options for: Charlie Furbush, Jerome Williams Duel Despite This Being The Year 2011

A few years ago, on June 28th, 2008, the Angels held the Dodgers without a hit. It's a game that might not stick out in your memory, and for a few reasons:

(1) It didn't involve the Mariners
(2) No-hitters are kind of passe, or at least they're not the earth-shattering events we thought they were growing up
(3) It was a combined no-hitter, as Jered Weaver yielded to Jose Arredondo for the seventh
(4) The no-hitter only lasted eight innings

Well, if it's ridiculous to lose while allowing zero hits, it's only a little less ridiculous to lose while allowing one hit. And tonight, against Jerome Williams and Jordan Walden, the Mariners scratched out one hit. That one hit held up. It held up until the bottom of the eighth. But then the Angels rallied, and it didn't even feel like a punch in the gut, because up until then, it felt like the Mariners were getting away with something. They had a chance to win, but they didn't deserve to win, because they had one hit to their credit.

Viewed through the lens of the Angels erasing a late deficit, you could say this was payback for the Mike Carp games last week, or the Carlos Peguero games earlier in the season. Viewed through the lens of the Angels only allowing two guys to reach base, you could say this was just the Angels winning a game they ought to win. Baseball games are nine innings long. There are nine innings available for things to balance out. Things balanced out for the Angels in the eighth. Hard to be too upset. The M's put two dudes on. The Angels put seven dudes on. Seven dudes > two dudes.

Charlie Furbush had reached 97 pitches. There was one out in the bottom of the eighth, there were two guys on, and the Mariners were clinging to a 1-0 lead. The first guy had reached on an infield single, while the second guy had reached on a walk. Maicer Izturis was due up, and Tom Wilhelmsen was ready in the bullpen. Eric Wedge decided to stick with Furbush. Furbush allowed a two-run double to the gap, and the game was basically over.

Not so much, turns out:

"I wanted to give him the opportunity, I felt like he'd earned it,'' Wedge said. "Plus, Izturis is a lot better from the left side, so I didn't want to turn him around right there.''

Wedge later repeated: "That was the main reason. I didn't want Izturis left-handed up there in that situation.''

I want to reiterate that it doesn't really matter. The Mariners are 59-83. We are way beyond it making sense to criticize the manager's in-game decision-making. But this is bad. This is a bad thought process.

So I have no idea what Wedge is talking about here. Absolutely no idea. He had the option of having Izturis bat righty against a tiring lefty, or having Izturis bat lefty against a fresh righty, and he went with the former. He got burned. Furbush put a not-bad-but-still-centered fastball over the plate, and Izturis stung it into the gap.

Maybe Wedge is lying about his reason. Managers don't always tell the truth. They have no obligation to tell the truth. But I don't know what he'd be trying to keep secret. Wilhelmsen was clearly good to go, since he came in after the double. And if Wedge just wanted to see if Furbush could get out of the jam, he could be honest about that. He wouldn't catch any flak from fans, journalists or players for trying to see what a young player could do in September of a development season.

Weird. It's not like Furbush was running on fumes - he was starting to lose it, but his last fastball was 90 miles per hour. And it's not like Wilhelmsen is some bullpen ace, recent stretch be damned. But still, weird. There's an explanation I would've readily accepted for Wedge's decision, and instead he offered an explanation that is inarguably untrue.

Liddi's highlight was a backhand stop he made in the field in the seventh. That ensured that his debut wouldn't pass without any positives. At the plate, he fell behind 0-2 in his first at bat before grounding out, and he struck out in his second at bat on five pitches. Four of his five swings whiffed - all on low cutters - but, again, debut. We know Liddi has a thing for swinging and missing, but I'm not going to be too critical about his performance in his first-ever game in the bigs. At least the first time he went up, he put the ball in play. That's better than you could do! 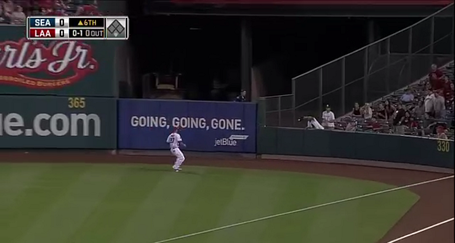