Share All sharing options for: The Seattle Mariners Baseball Club is now 59-82 in 2011 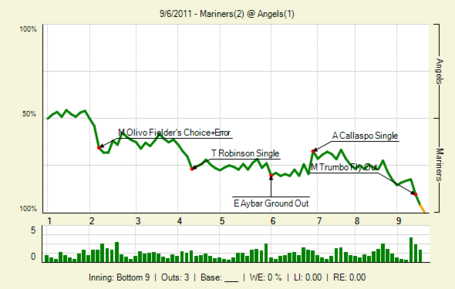 Something will be made of the fact that neither team scored an earned run in this game, but while that is true and certainly an unusual occurrence, it does not do justice to the game or to the Mariners. Disregarding the errors made by teams, the Mariners put 13 men on base via hit or walk to the Angels' six. The Angels had a two-out nobody-on double and a stolen base. The Mariners had a two-out nobody-on triple and three stolen bases. The Mariners were better than the Angels tonight. And on top of that, the Angels assisted with four errors. The Mariners had their chances, but a 2-for-14 with runners in scoring position prevented this from becoming more a relaxing game from their standpoint. It's your own damn fault your blood pressure is high, Mariners! You're going to give yourself cardiovascular problems later in life and it will be because you are bad at hitting.

Felix Hernandez cruised through the Angels lineup for sure, but was he actually better than Ervin Santana? Santana generated 14 swings and misses to Felix's paltry (for him) six and while Felix didn't allow much solid contact, neither did Santana. That's not the entire story though as despite throwing a few fewer pitches overall, Santana saw more swing attempts (50) than Felix (43) did and Ervin missed the strike zone a little more often. Both pitchers were ground ball crazy tonight. Felix had 15 of 22 balls in play on the ground (68%) while Santana countered with 14 of 24 (58%). From a pure pitch result perspective, the two look about even, but context and sequencing matters and despite a similar number of batters faced, Felix ended up with three more strikeouts. He also ended up with the win, which is neat for him.

Other good things we got to see was a multi-hit game from Justin Smoak and --yawn-- Dustin Ackley with another triple. Ackley has the team's best OPS by 49 points (assuming you aren't counting Doug Fister's .333/.333/.500 line). We even saw a return of Ichiro! in the field robbing Vernon Wells of a ball that Ichiro wasn't even looking at. Seriously. Not even looking. What a badass.